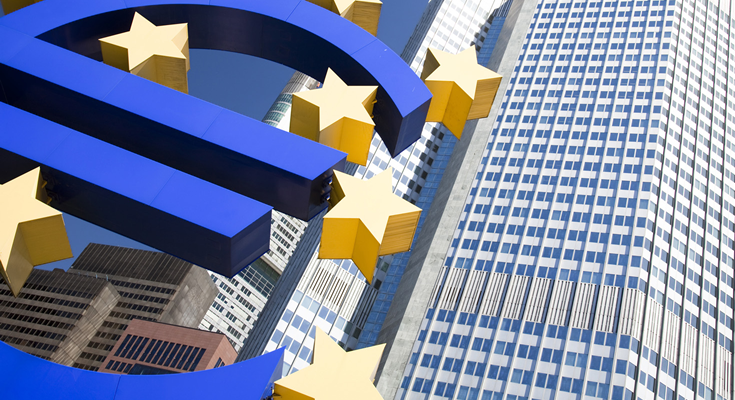 Uncertainty surrounding the protracted Brexit negotiations has seen many investors shy away from European equity markets in favour of higher returns in the US.

Yet, with the US economy looking increasingly vulnerable to a slowdown, it might be time to refocus your sights on Europe – 20% of the world’s GDP.

Why have Australian Investors Been Wary of Investing in Europe?

Economic conditions in Europe have been surprisingly resilient throughout the political to-ing and fro-ing that has accompanied Brexit. European stock prices, however, have lagged their US counterparts.

In 2018, the primary benchmark EURO STOXX 50 Index fell by around 14.3%, compared to a decline of just 6.2% by the S&P 500 during the same period. Poor performance by banking and auto stocks due to jitters around interest rates and tariffs, respectively, were the primary factors depressing European markets last year.

Investor sentiment on Europe has been dampened by a range of factors. The cloud over Brexit, and its likely impact for the UK and continental Europe, is the obvious culprit. Ongoing budgetary conflict between Italy and the European Union, fears of an escalation in global trade wars and speculation on when the European Central Bank will raise rates, have also weighed heavily.

But Do These Fears Stack Up?

So far in 2019, it is a different story. The EURO STOXX 50 is up 9.4% year to date, tracking similarly to the S&P 500 (also up 9.4%) and relative valuations look more attractive. The euro is also approaching two year lows, which could provide a boost to Europe’s export sector.

There are also suggestions that underlying economic conditions in the powerhouse economies of Europe are stronger than sentiment would suggest. This view is supported by the release earlier this month (March) of the Markit Eurozone Composite PMI numbers for February which were revised upwards to 51.9, the first increase (albeit slight) in private sector activity in three months. The PMI index tracks business trends across manufacturing and services based on data from over 5,000 companies.

Another sign that the negative sentiment around Europe might have been overdone is the Citibank European economic surprise index. This index (which measures data surprises relative to market expectations) while still in negative territory, has been ticking upwards since the beginning of the year.

Emotions Do Not Equal Facts

The tendency for sentiment to run at odds with economic reality was raised recently by Martin Beck, chief economist at Oxford Economics. He spoke of the “the difficulty of separating emotion from hard economic developments in driving survey responses” during times of high uncertainty.

A number of factors underscore the view that Brexit uncertainty is having a disproportionate impact on investor sentiment. Unemployment across Europe continues to fall and is at 10 year lows, wages growth has picked up and German retail sales rebounded in January, rising more than 3%. 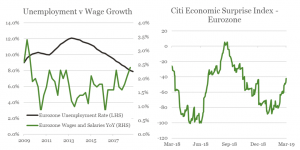 …. And What About BREXIT

So how great are the Brexit risks for European stock performance?

Certainly the economic fortunes of the UK are deeply entwined with those of the EU. The UK is among the EU’s three largest trading partners, accounting for about 13% of its trade in goods and services.

While Brexit uncertainty has been damaging for both the UK and the Eurozone, the worst case ‘no deal’ scenario is likely to hit UK companies much harder than their European counterparts.

The IMF has forecast that a no deal Brexit could result in a 4% hit to the UK’s GDP BY 2030 should Britain end up adopting the default World Trade Organisation rules for its trading relationships with the EU.

The two countries with the largest weighting in the EURO STOXX 50 index, France and Germany by comparison are expected to suffer declines of only 0.2% and 0.5% of GDP, respectively.

Meanwhile, a more benign Brexit scenario preserving access to the single market but not membership of the customs union would have only “negligible” impact on output and employment for the EU, according to the IMF.

The ultimate consequences of Brexit for both the UK and Eurozone countries, however, are likely to take many years to materialise and will depend on whatever shape any eventual deal takes.

As with any late cycle investment strategy, the key to any European foray is to focus on quality companies with strong earnings track records.

To this end, Europe offers some of the world’s most prestigious blue-chip names. The EURO STOXX 50, includes the 50 largest and most liquid stocks operating in the Eurozone.

For investors looking to gain exposure to Europe, exchange traded funds offer a way to gain widespread diversification at a low-price.

The ETFS EURO STOXX 50® (ESTX) offers broad based exposure to the 50 largest companies across the Eurozone by tracking the performance of the EURO STOXX 50 Index. For the year to date, ESTX is up 8.0% (in AUD).