Coronavirus continues to wreak havoc globally and in Australia, but there are increasing signs that its grip is loosening as humanity gets the upper hand thanks to science and modern medicine. This note looks at the current state of play regarding coronavirus, the risks and the implications for investors.

There are five key reasons for optimism regarding coronavirus.

• First, new coronavirus cases globally are continuing to fall with most regions in a downtrend or flat. 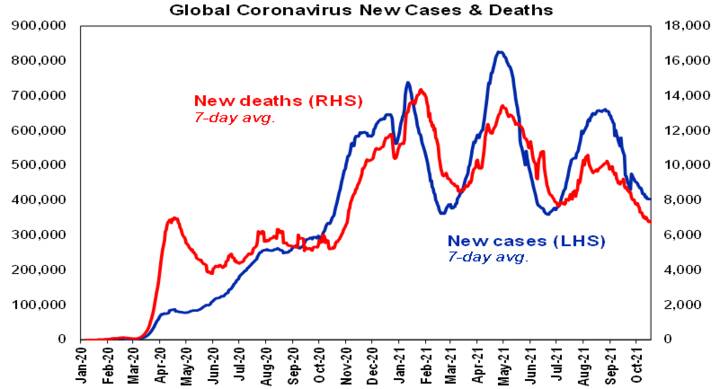 • Second, the Delta variant arguably turned out to be less transmissible globally than was feared in mid-year as even some poorer less vaccinated countries & regions have not seen a feared surge in cases (eg, Africa & South America).

• Third, vaccines appear to be working. Of course, coronavirus has surged and subsided before so it could rebound again which is why vaccines are so important. While they may be only 60-80% effective in preventing infection – and this fades a bit after five months or so requiring booster shots – they are highly effective at around 85-95% in preventing serious illness. This is evident in new deaths remaining subdued relative to past waves – eg in the first chart new deaths globally have been in a downtrend this year relative to new cases. It’s particularly apparent in the more highly vaccinated developed countries where hospitalisations and deaths are far more subdued relative to new cases in comparison to the previous wave. For example, deaths in the UK (the red line in the next chart) are running less than 20% below the level suggested by the December/January wave (the dashed line). While Israel saw a Delta spike in new cases in August and September – likely not helped by waning efficacy for Pfizer vaccinations from earlier this year – the level of hospitalisations and deaths remained subdued compared to the previous wave and all are trending down, again helped by booster shots. 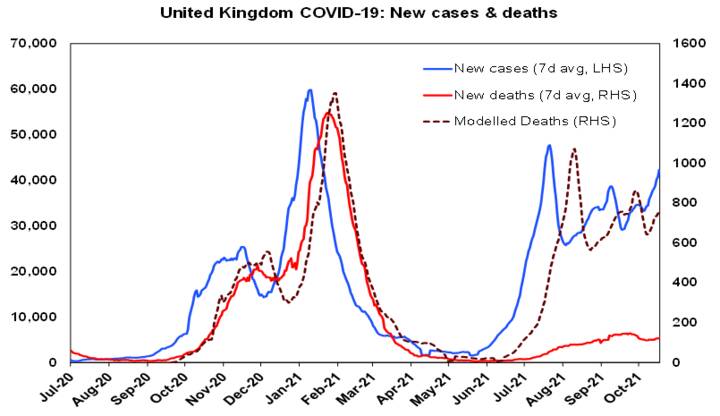 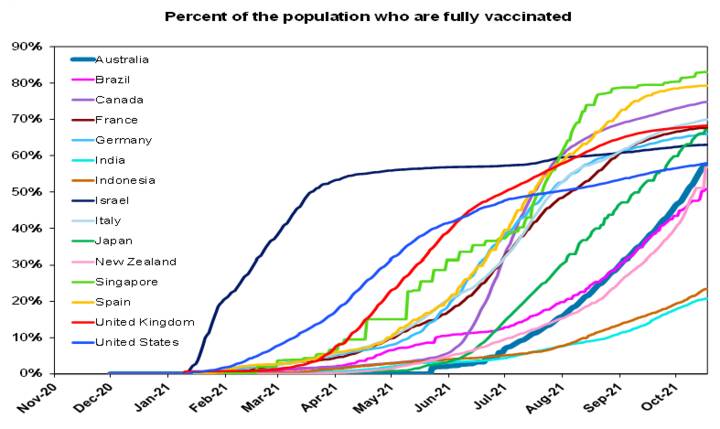 • Finally, there are now several effective coronavirus treatments either approved or seeking approval. These include Ronapreve from Roche, a Merck COVID-19 treatment pill and AstraZeneca’s antibody cocktail – where clinical trials of all three showed the risk of severe illness to be at least halved – and a Pfizer anti-viral cocktail. So, there’s now more ways to treat patients. These are useful for high-risk groups for whom vaccines are less effective and the unvaccinated.

In Australia, new cases in Victoria are down from their recent high and if NSW, which led by a month, is any guide, Victoria should peak soon if it hasn’t already. 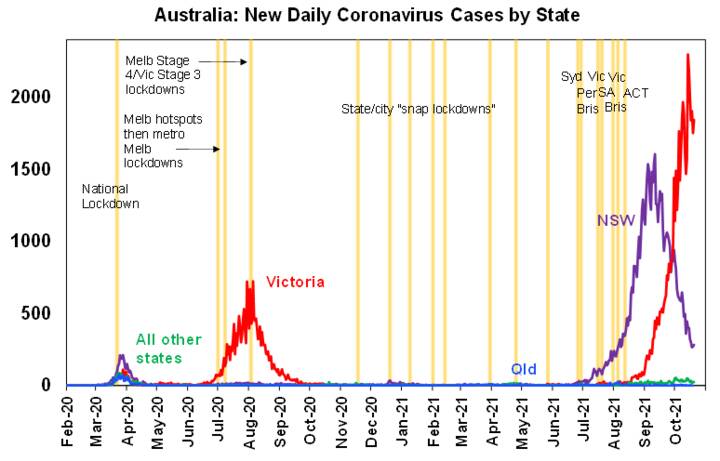 After a slow start Australia is vaccinating around 1.1% of the population a day. 58% of Australia’s whole population are fully vaccinated which is in line with the US and 73% have had one dose which is well above the US. For first doses for adults, the ACT is at 98%, NSW is at 92%, Victoria will reach 90% in a few days and Australia will reach 90% in early November. Allowing for current trends and the average gap between doses the next chart shows roughly when key vaccine targets will be met. 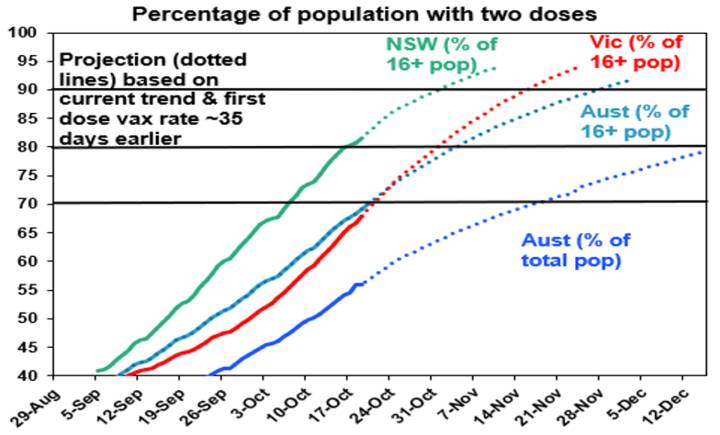 NSW and the ACT have already reached the 80% of adults double vax target. Australia (on average), Victoria and Tasmania are either at 70% of adults or will be there in a day or so and will hit 80% late this month or early next month. Other states and territories will hit the 70% target in mid-November.

Meanwhile, vaccination is continuing to help keep serious illness down in Australia too and is the key factor supporting the reopening now underway. Coronavirus case data for NSW shows that the fully vaccinated make up a low proportion of cases (at around 5%), hospitalisations (5%) and deaths (11%) despite making up 67% of the NSW population as a whole and around 80% of the older most at risk of dying from coronavirus population. The level of deaths in Australia (the red line in the next chart) is running at around 20% of the level predicted on the basis of the previous wave (dashed line). On this basis the vaccines are helping save roughly 54 lives a day at present. 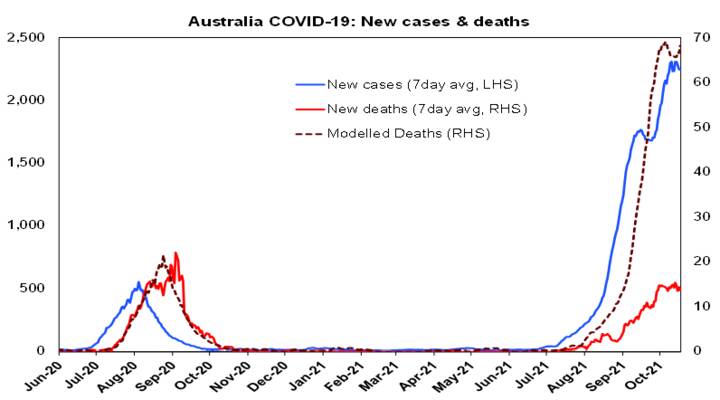 Key risks to watch for globally are:

• a possible resurgence in cases in the northern winter particularly as vaccine efficacy starts to wear off in some countries in the absence of rapid booster programs. This may already be happening in the UK (where new cases are on the rise again) and parts of Europe. The key though is what happens to hospitalisations – if they remain subdued as has been the case since June and the hospital system is coping then it should be manageable;

• the possibility of more transmissible/deadly mutations; and

• the low level of vaccination in poor countries which is currently around 18% with a first dose – which contributes to an ongoing risk of mutations.

Some increase in new cases in NSW, the ACT and Victoria after reopening is highly likely. But the main risk in Australia is that too rapid a reopening in south eastern Australia leads to a resurgence in cases – like Singapore which after reopening saw new cases surge to around 3000 a day – which threatens to overwhelm the hospital system, necessitating new restrictions to slow new cases down. Which is what Singapore has done. Note that NSW is still only at 67% and Victoria at 55% of the whole population fully vaccinated compared to 83% in Singapore. This could particularly be a risk in the months ahead if vaccine efficacy for those vaccinated earlier this year starts to wear off. A less risky approach would have been to wait three weeks or so between each reopening stage in order to ensure that new cases and most importantly hospitalisations are not surging and overwhelming the hospital system. At this stage it’s all just a risk though, booster shots are now on the way from next month and even if it does happen it would probably not be enough to derail the economic recovery as a return to long hard lockdowns is most unlikely unless vaccines completely fail in preventing serious illness.

While the risk of setbacks remains, our broad perspective is that coronavirus is gradually coming under control and this will permit a sustained reopening globally and in Australia in the months ahead. Although coronavirus will leave some lasting impacts, at a very high level sustained reopening will be positive for the investment outlook as reopening means:

• more demand – and in Australia a resumption of the economic recovery this quarter; and

• a return to work and a rotation in spending back towards services as opposed to goods.

The former is positive for corporate revenue (albeit profit growth will be slower than it has been) and the latter should ultimately relieve supply constraints and inflation pressures – although it may take 6-12 months. It will mean a continued winding down of ultra-easy monetary stimulus though.