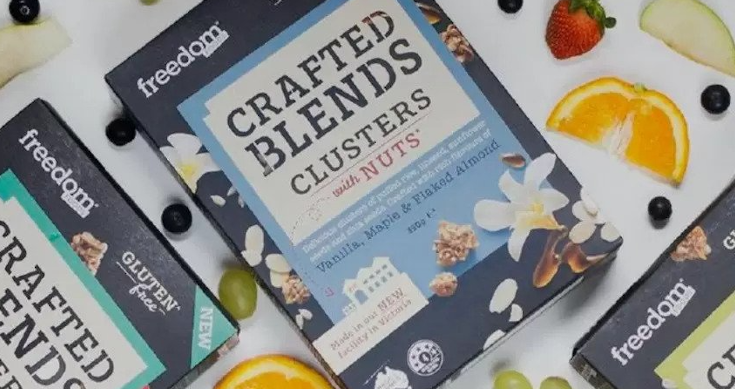 Freedom Foods has successfully completed a $265 million recapitalisation that it hopes will ensure the ongoing viability of the business and pay down debt following its near collapse late last year.

The snacks and cereals maker was forced to write down nearly $600 million write-down of its accounts last year due to serious accounting issues with out of date stock and problems with employee share issue valuations.

The raising was first mooted earlier in the year after the company’s woes were exposed in a long statement and report to the board and the ASX.

It finally got underway last week with a $130 million wholesale investor offer and a scalable placement of shares to Arrovest, the company’s majority shareholder and the wealthy Perich family’s investment arm.

Freedom yesterday told the ASX its wholesale offer had been oversubscribed, with the company receiving $138.9 million from a number of domestic and international funds. This meant Arrovest’s placement was scaled back to $126.1 million in convertible notes.

At one stage it appeared that Arrovest might have to fund all of the $265 million recap, but a determined marketing campaign saw other investors step forward.

“We’re delighted with the level of support shown by existing and new investors for the Company, which we view as a strong endorsement of the turnaround strategy now well underway,” Freedom chair Genevieve Gregor said in a statement to the ASX.

“The completion of this recapitalisation plan will enable Freedom Foods Group to substantially repay its bank debt, providing us with the financial flexibility to execute the turnaround strategy and return the Company to long-term sustainable and profitable growth for the benefit of all shareholders and investors.”

The Company has agreed to apply approximately $231 million, excluding interest, from the proceeds of the Capital Raising towards repayment of its existing senior term, revolving debt and subordinated facility. The balance of proceeds will provide working capital for general corporate purposes and will be used to pay for fees and expenses associated with the Company’s broader Recapitalisation.

The company has an extraordinary general meeting down for today (Tuesday) to consider a number of issues linked to the recap.

The most important of those is a resolution approving the grant of approximately 40.8 million options to shareholders, other than Arrovest.

The options will provide an opportunity for potential future equity participation for shareholders, including those who were not able to participate in the Wholesale Investor Offer.

Investors liked the news of the successful raising and the shares rose 3.5% to 44.5 cents.

Still on fund raisings and small financial services group, MyState is looking for up to $80 million from shareholders and big investors.

Trading in the company’s shares was halted yesterday to allow the raising to get underway.

“We now see an opportunity to build on that success and substantially increase our growth trajectory,” chairman Miles Hampton said in the statement to the ASX.

“This is important as it helps us to remain competitive and provide the services that our customers expect whilst improving shareholder value.”

The raising consists of a $20 million fully-underwritten institutional placement, and a partially underwritten 1 for 6.6 pro-rata accelerated non-renounceable entitlement offer to raise gross proceeds of approximately $60 million. The Entitlement Offer is underwritten to $30 million.

All shares issued under the Placement and Entitlement Offer will qualify for the final dividend expected to be announced with the company’s full-year results in August.

It is expected that the dividend will be no less than the first-half dividend of 12.5 cents.

The company said on Monday its financial performance for the 10-months to April 30 is well ahead of the prior comparative period, with net profit up 17.1% (no figures were given).

MyState also said it was is on track to deliver growth in pre-provision operating profit of 11% to 14% and a positive costs-to-income ratio – notwithstanding higher costs to support accelerated growth in 2021-22.

And a weak update from NZ dairy group, Synlait which really seems to be in the wars.

The company downgraded its guidance figures after it conducted an internal review of the “already disclosed risks” that are currently hitting its business performance.

Synlait said in the state that it now expects to make a net profit after tax (NPAT) loss of between $20 million and $30 million in FY21.

The new guidance compares to that in a March statement that dropped the earlier forecast and said it was looking for the June 30 result to be “broadly breakeven”.

That’s no more thanks to a combination of shipping delays, which will delay the sale of some ingredient products until after the June 30 financial year close.

Synlait said it is also achieving lower prices for ingredient products than usual, due to “prevailing market prices”, which it blames on a combination of sales phasing and volume pressure.

On top of this the company says it is now adopting a “more conservative” approach to year-end inventory volumes and valuation, leading to what it believes is a safer guidance figure.

A major factor in its problems as been the slump in sales and profits at its major customer, A2 Milk Co.

And on top of all this the company has lost its CEO and chief financial officer in the past two months, making for an unstable management at the very time when stability and experience at the top is needed.