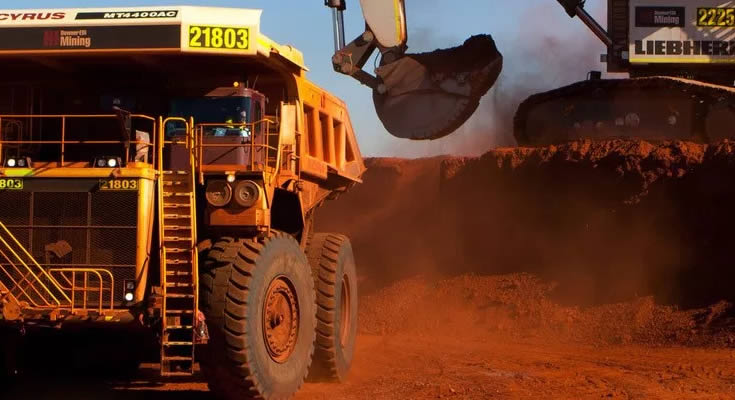 Global iron ore prices surged to new multi-year highs well above $US150 a tonne on Thursday after a tropical low in the Indian Ocean triggered moves to clear Port Hedland of vessels and send them to sea.

The news sparked a sharp rise in iron ore prices, which in turn helped send the Australian dollar to a new three year high of 75.35 US cents.

That’s the first time the currency has topped the 75 US cent mark since March 2018.

That was the highest level for the steelmaking raw material since February 2013 and brings gains for December to more than 18% and for 2020 to 70%.

The already tight global market for iron ore was rattled by a warning from the Pilbara Ports Authority that the first topical low of the season had been declared.

“A tropical low is located some 740 kilometres/400 NM South East of Christmas Island. The low is forecast to bring gale force winds and significant swell as it approaches the Pilbara coast.
“Pilbara Ports Authority has commenced clearing the port and anchorages of the Port of Port Hedland of all large vessels,” the statement said.

Port Hedland loads more than 1.2 million tonnes a day, 24 hours a day and if the port is closed for any length of time, it will push prices higher as catching up on the stockpiled ore.

The global iron ore market has been boosted by China’s huge demand for steel in its post-COVID stimulus spending. That saw imports of iron ore top a million tonnes in the 11 months to November, a month ahead of 2019 when just over the same amount was imported in the calendar year.

A shortage of iron ore from Brazil has added to the price pressures as Vale, the big miner and exporter has fallen short of guidance for 2020 and effectively downgraded guidance for 2021.

At the same time exports through Port Hedland fell in November from October because of maintenance by the Roy Hill mine and lower shipments from Fortescue.

Gina Rinehart’s Roy Hill saw a 31% slide, exporting 2.8 million tonnes of iron ore in November as it carried out port maintenance. That helps explain the 13% slide in exports to China in November and some of the price pressures that have continued into December.