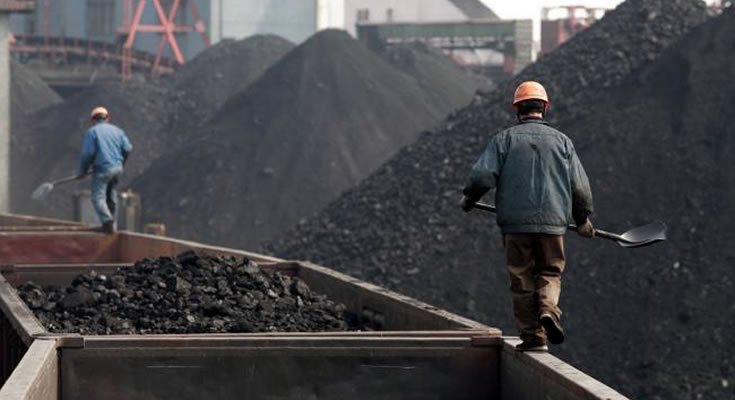 China’s response to the Covid-19 pandemic has differed to many OECD nations. As a Centrally Planned Economy, China appears to be relying more upon direct industry intervention and less upon monetary and fiscal stimulus compared to most OECD nations, or to its own massive post-GFC macroeconomic stimulus in 2009.

Swift industry policy implementation in JunQ20 saw directives for local coal-users to favour China’s domestic mines and reduced use of imported coals. This saved local jobs and restored cashflow for debt servicing that contributed financial stability of the banking sector and some highly leveraged Provincial Governments.

However, policy shifts impose and relocate costs. In this case power generators and heavy coal users like cement, coke and chemicals industries are bearing the higher input prices for Chinese domestic coal versus cheaper imported coals. In some cases, there is also an environmental trade-off as imports have either lower impurities (like sulphur) or burn less volume for more energy than local coals.

In Chart-1 the red line is an Index of China’s domestic thermal Coal prices. The blue line is the export price of Newcastle standard thermal Coal (Source: FactSet). In 2018, strong coal demand saw import prices trade above local prices to attract necessary spot volumes. The coal market progressively cooled through 2019 and this saw Chinese authorities either impose stricter quota adherence or otherwise intervene in the market. The result was that Newcastle coal prices halved during 2019, while the local Domestic coal traded up to a 40% premium to import prices – see the green shaded area. However, by late 2019, market dynamics saw this premium shrink as sanctioned coal import volumes recovered and import prices again rose. 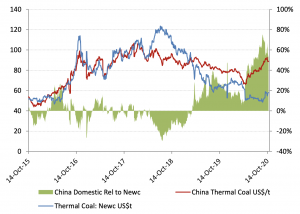 It’s tough for producers again – but with an improving outlook

The Covid-19 shock by March 2020 saw Domestic coal prices plunge and the above-stated Government directives were issued to use local coals. This time the Domestic thermal coal price premium to import prices shot-up to over 60%, though with some evidence of this premium is now starting to roll-over.

Our expectation is that China’s use of interventionist industry policy will remain a primary lever of control over the economy. However, there will be times that the Domestic coal preference policy will be eased. In our view the case for easing restrictions is actually building for the following reasons:

Firstly, the full maintenance of domestic preference comes with a sizable and potentially unsustainable opportunity cost to China in raising input costs to industry. This cumulative burden on industry is getting heavier, made worse by the rising price of the competing fuel – LNG, now US$6.50mmbtu and up 160% in 3-months.

Secondly, as the Chinese economy recovers, coal demand will rise. Restricting imports can come with both un-met demand and logistical issues. Incredibly, China’s 6.9% YoY Sep’20 Industrial Production is back to the pre-virus growth trend. With demand rising, any domestic interruption to supply can have expensive consequences, particularly for during peak seasonal use.

Finally, shortages of best specification coal for its value-in-use may be only by alleviated by imports. Local coal alternatives may deliver lower productivity and higher pollution. As capacity utilisation rises, then productivity and pollution become more acute variables.

We see that China’s coal industry policy will likely see periodic tightening and loosening of import controls. Just like cyclones, fires and the odd-GFC – producers and investors just need to adapt to it. This is evidenced by Australian thermal coal suppliers seeking further market diversification and as well as some production cuts particularly of lower quality coals.

In coming months, we see some positive trends in China for a resumption of higher thermal coal import rates. Perhaps these positives trends are starting to have an impact as the Newcastle thermal coal price at US$58/tonne has recovered back to levels a fortnight ago, when the press reported of a tightening of coal import restrictions.