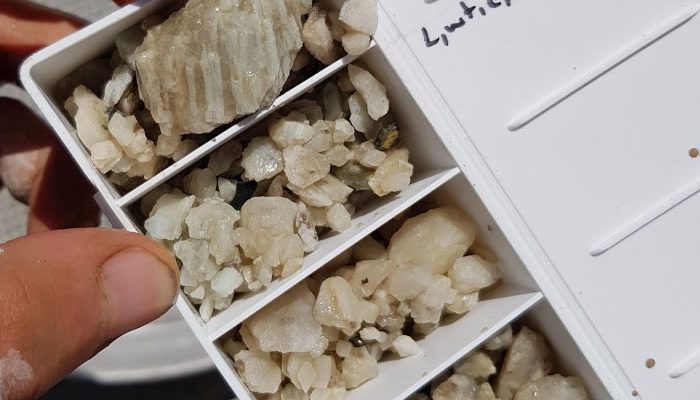 LTR has been an outstanding market performer, with investors developing a thorough appreciation of the significance of the company’s Kathleen Valley lithium project in Western Australia, based on exceptional drilling results. The updated MRE represents a 108% increase in tonnes and 119% increase in contained lithium from the July 2019 MRE that underpinned the positive Pre-Feasibility Study (PFS) released in December 2019. The Study generated robust financial outcomes, reflecting the project’s scale, grade, product quality and proximity to established, modern infrastructure – as well as likely upside potential. These growth options will be considered as part of the revised DFS that’s scheduled for release during H2 2020. LTR has also recently reported a maiden Mineral Resource Estimate (MRE) for its Buldania Project in Western Australia, confirming a significant new greenfields lithium discovery with growth potential.

The results are considered by LTR’s geological team to be exceptional for this early stage of exploration. They have expanded previously-identified strong gold, PGE, nickel and copper anomalism, as well as defining a number of new targets, which has further enhanced the project’s potential and helped pave the way for the next phase of exploration.

The second auger program comprised 1,698 samples and was designed to both in-fill geochemical anomalies defined by wide-spaced 400m x 400m sampling completed during March and April 2020, as well as provide first-pass coverage across areas adjacent to the maiden sampling program.

The second area identified is the 7km x 7km Bindi Nickel area, located within the central part of the project, which includes a number of strong nickel anomalies with values of up to 1,720ppm Ni, consistent with historical exploration results that include significant shallow drill intersections (e.g. up to 21m @ 0.6% Ni from 1.5m).

LTR’s Managing Director, Mr David Richards, believes the auger geochemistry at Moora has produced some of the best early-stage exploration results that he had seen in his +35-year career. The coincidence of extensive high-order gold-PGE-nickel anomalism with large magnetic bodies indicates the potential for a mineralised system of significant scale.

The Mt Yule – Felton Corridor (MYFC) represents a 15km long, 2.5km wide, northwest-trending zone that contains numerous gold-PGE anomalies coincident with magnetic highs, which are indicative of near-surface, mafic-ultramafic intrusions obscured by shallow cover. The corridor transitions from being gold-dominant in the northwest to PGE-dominant in the southwest.

The high gold, PGE, nickel and copper results suggest that the interpreted mafic-ultramafic intrusions within the MYFC are analogous to similar units that host the Julimar discovery ~95km south of the Moora Project, where Chalice Gold (ASX: CHN) recently announced a sulphide-related intersection of 10m @ 1.2g/t Au, 3.5g/t Pd+Pt, 0.1% Ni and 1.3% Cu. 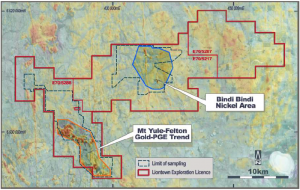 Secondly, the Bindi area has defined a number of nickel anomalies (up to 1,720ppm Ni), including several that are coincident with mafic-ultramafic bodies mapped by government geologists. The potential for nickel within the Bindi area was originally identified by Poseidon Limited in 1968, with shallow RAB drilling returning a number of significant intersections including 9m @ 0.62% Ni from 0m, 11.5m @ 0.60% Ni from 1.5m and 21m @ 0.57% Ni from 1.5m.

The area drilled by Poseidon is coincident with LTR’s northern-most nickel anomaly and the intersections were reported to be hosted by strongly-weathered, oxidised ultramafic rocks. Poseidon interpreted the elevated nickel values to be related to primary sulphides at depth based on the steep orientation of the mineralised zones and the presence of anomalous (>300ppm) copper nearby. Further work was planned by Poseidon, however its focus shifted to the Eastern Goldfields following its discovery of the Windarra nickel deposit which triggered the Nickel Boom.

An airborne electromagnetic (AEM) survey is scheduled to commence during early August 2020, which will cover the entire project area with 200m-spaced lines. Electromagnetic techniques have proven to be effective elsewhere in the region, including Julimar, for defining sulphide bodies. The results of the survey, which are due by late August, will be combined with the auger geochemistry to plan a maiden drilling program. LTR will also extend auger sampling across the remainder of the project area with a focus on yet-untested magnetic anomalies. 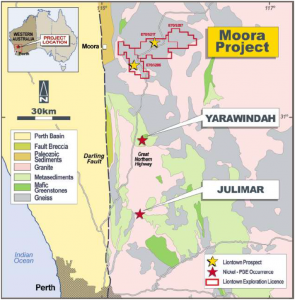 The latest results at Moora are considered by LTR’s geological team to be exceptional for this early stage of exploration. They have expanded previously-identified strong gold, PGE, nickel and copper anomalism, as well as defining a number of new targets, which has further enhanced the project’s potential and helped pave the way for the next phase of exploration. The coincidence of extensive high-order gold-PGE-nickel anomalism with large magnetic bodies indicates the potential for a mineralised system of significant scale. We will follow the release of further exploration results with great interest.