A significant 8km of strike extensions to known mineralisation at the high grade Kookynie Gold Project in WA has been identified through mapping and re-processing of regional geophysics.

MCT underwent a major operational refocus during 2019, with the introduction of new exploration projects in Western Australia, specifically gold-focused projects. Through a Farm-In Agreement with Nex Metals Explorations, MCT has gained access to the prolific Kookynie and Yundamindra Gold districts within the Eastern Goldfields of Western Australia. The company’s flagship project, the Kookynie Gold Project, is an exciting, underexplored area. The Farm-In agreement is an excellent pathway to earn-into this project, as it allows MCT ‘to invest money in the ground.’ In addition, MCT has secured exploration licence applications in the Paterson Province, through to the Musgrave Area and the Fraser Range, of Western Australia, which is rapidly growing into one of the most prolific exploration regions of the world. At present, MCT’s exploration focus is on its Kookynie project, where renewed RC drilling is underway.

MCT has provided an exploration update with respect to its Kookynie Gold Project in the Western Australia’s Goldfields region.

MCT has announced a significant step change in the potential of its high-grade Kookynie Gold Project, with the identification of ~8km of strike extensions to the known gold mineralisation from mapping work and the re-processing of regional geophysics. This reinforces MCT’s belief of camp-scale gold potential at Kookynie. 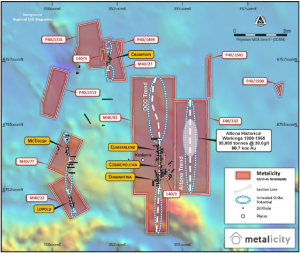 The Kookynie Project includes the high-grade historical Cosmopolitan mine that produced 360,000 ounces of gold at a grade of 15 g/t. MCT has now identified that the structures that host Cosmopolitan extend for ~2km to the north and south of the mine. The strike extensions are untested by modern exploration and no drilling has been conducted. MCT has also identified 4km of strike extensions to the Altona historical mine that produced 80,000 ounces at a very high grade of 30 g/t gold. A further 2km of strike extensions to the Champion, Leipold and McTavish Deposits have also been identified.

The 8km of strike extensions to the structures that host the gold mineralisation at Kookynie, demonstrate the potential size of the mineralised system. With an “Exploration Target” of between 294,000 ounces and 967,000 ounces, and inclusive of historically-stated mineral resource estimates and previously excluded areas of underground development already in place, this further enhances MCT’s belief of camp-scale gold potential at Kookynie.

MCT is planning to drill-test these strike extension shortly. To refine the targets for drill-testing, MCT has engaged RocAerial to recommence the very high-detailed magnetic geophysical survey. The survey is currently underway and is expected to take circa 2-3 weeks and will be conducted over the 8km of strike potential from the known mineralised areas of Leipold, McTavish, Champion, Diamantina-Cosmopolitan-Cumberland and the Altona trends.

This drone-supported aerial survey will allow for a much clearer and exceptionally more detailed mapping of the geology and structural hosting of potential mineralisation. This in turn, will allow the company to plan and execute efficient and well-targeted exploration programs maximising the possibility of discovery and eventual delineation of mineralisation.

MCT has also recently recommenced drilling at Kookynie. The return of significant intercepts from the December 2019 drilling program confirmed that mineralisation extends past previously developed and drilled areas at the Kookynie Gold Project, so a staged program has begun to follow up on these results, comprising an initial 40-hole RC program. The first stage of this expanded exploration program will be concentrated on the Leipold and McTavish Prospects.

MCT has been busy at Kookynie since it became involved during late 2019, so far conducting two drilling programs that have delivered solid results – including significant intersections from each of the historically-mined prospects, with the potential for elevated grades. When combined with the latest review of historical geophysics, there is excellent potential for gold mineralisation to exist beyond areas historically mined and drilled.