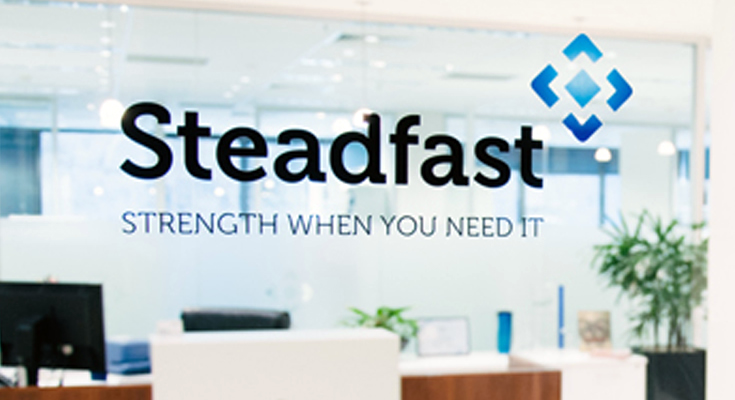 Following the release of full-year results to 30 June 2019 (FY19) and a pullback in the share price, we analyse the fundamentals and technicals of Steadfast Group (ASX:SDF).

Steadfast Group has the largest general insurer broker network in Australia, with a market share of ~30%. It also has a small footprint in NZ and Asia. The Company has a stable network of brokers that has grown as new brokers have joined the group. This is either individually or as part of an acquired group, while only a very small number of brokers have left. As at 30 June 2019, the Steadfast Network had 398 brokers having grown steadily from 278 brokers as at August 2013.

The key earnings driver for SDF is the broker network. This forms the majority of overall Gross Written Premium (GWP). The Company earns marketing and administration fees from its insurer partners. These are then are used as a revenue stream to provide products and services to the Steadfast broker network, as well as rebates to brokers. The bulk of the remaining GWP is generated from the Company’s Underwriting Agencies division, with SDF being the largest underwriting agency group in Australia.

We consider that the earnings growth profile (which is typically defensive) has great visibility. Earnings growth is supported by organic growth (via additional growth in the broker network and favourable rate cycle) and acquisition growth (via stand/alone businesses and/or increased equity interests).

Organic growth in FY20 is also being supported by a favourable environment of rising premium rates. SDF has commented that the cycle should continue for another 18 months. (Based on historical trends, insurance cycles are considered to last 3-4 years). This is a positive for SDF, as the Steadfast broker network is also exposed to the uplift in the commercial insurance cycle in Australia. Over 80% of SDF’s customer base is from the SMEs segment, which typically have less pricing volatility.

Further, comments from ASX-listed competitor AUB Group (ASX:AUB) at its full-year results suggest that the current global underwriting cycle is expected to last 6-7 years. AUB also estimates that we are “in year 3 or 4” into the current cycle.

SDF has shown an ability to hold margin in light of the elevated investment levels over the last two years. This is mainly due to the Steadfast Client Trading Platform (SCTP) initiative. Further, the opportunity remains for SCTP earnings to ramp up to the targeted levels as upfront investment in technology pays off in future years.

The gearing level remains modest and well below the Company’s 30% target. Debt serviceability is supported by strong levels of cash conversion (>100% in FY19 on an NPATA basis) as well as high interest coverage levels.

Concurrent with the FY19 results release, SDF announced an equity raising. This has improved the available debt capacity for acquisitions and reduces gearing even further. It also provides the Company with additional scope to pursue either:

i. Additional insurance brokerage and underwriting agency acquisitions, for which there continues to be a strong pipeline, or

ii. Undertake equity-based acquisitions, whereby the Company can seek to increase ownership interest within its existing broker network and within their network.

In light of the above-mentioned factors, we recently took a positive view on Steadfast’s fundamentals. At present levels, SDF shares are trading on a 1-year forward P/E multiple of ~22x, which we do not consider demanding in light of mid double-digit EPS growth in FY20 and potential upside to EPS estimates for FY21. SDF is expected to deliver FY20 growth at the top end of guidance. The Company has a consistent track record of achieving guidance and recent AGM commentary indicated that the business is performing strongly in the 1st quarter of FY20.

SDF almost touched $3.90 in early September before easing back. It then sat at a good support level in mid-October and then the move beyond $3.50 confirmed that it wants to head higher again. The only negative is that on 18 October there was lot of intraday price rejection from higher up. As long as any consolidation here can hold above the October low, then there is a good chance that SDF will be ready to head higher again.