While the world was wild for Tesla (TSLA), I noted at the start of the year shorting Tesla was one of my favourite trades of 2019 given that the outlook for the Company’s vehicles (and sales) was ridiculously optimistic and that competition would be arriving in the year from better technology, more powerful and higher quality manufacturers (namely Porsche and Rimac). Given Tesla had the premium electrical vehicle segment to itself for so long and couldn’t turn a profit, it was extremely vulnerable to a sell-off as its exuberant valuation would see a downward re-adjustment. The share price subsequently dropped from $332 at the start of the year to a low in June of $180 – a drop of 46%.

The process that helped to produce such a great return shorting Tesla is a long-term full proven strategy that I have over the decades applied to other “overvalued” companies including Dick Smith, Domino’s Pizza and my personal favourite GetSwift (GSW).

I now see the very same ingredients appearing for Netflix (NFLX) where a ridiculous valuation, combined with overly optimistic expectations are coupled with a dominant player being hit with a rapid increase in competition. The market is slowly adjusting itself but not nearly fast enough and certainly not in enough yet in price. For starters, Netflix trades on an earnings multiple of 113x! Compare that with the other F-A-N-G stocks with Facebook (28x), Amazon (78x) and Google (25x). Netflix is clearly an outlier.

But what about growth and its forward earnings potential? Expectations are high and that’s what makes Netflix so vulnerable to a serious price drop. The 12-month forward earnings multiple estimate still has Netflix trading at 60x. I however, question how accurate those current forecasts are given they are predicting a substantial increase in earnings of 88.6% for the next 12 months and over the next 3-5 years expectations are for an average growth rate of 61.7%!

How is this possible when at the last quarterly earnings result this was Netflix key statistics:

That is a serious disappointment on subscriber numbers. The most concerning about the subscriber numbers is that competition is yet to heat up in the streaming services industry. Apple is launching its own streaming service on November 1st (in 100 countries) with also an added feature called Apple Arcade that features a plethora of online games to play as well. Disney – the king of content – will also be launching their service on November 12th in the USA and Canada while Australia and NZ will have access a week later. Both streaming services are cheaper than Netflix. Roku, Stan, Amazon Prime, and HBO continue to perform well and I see these services, as the numbers above suggest, either taking subscribers away from Netflix or stifling its growth. We all can’t subscribe to all streaming services.

So if Netflix is already disappointing on subscriber numbers when the two titans of the industry are yet to launch (Apple the titan of device distribution and Disney on content) – how disastrous will those subscriber numbers be when competition really hots up? I see a very uphill battle for Netflix meeting growth targets of 88%. In fact, I see growth rates half that a difficult task. We saw with Tesla how aggressively the market can adjust to a “lower growth profile” and Netflix is no different.

The combination of a failure to meet forecasts and the market re-adjusting its pricing of Netflix so it no longer trades on earnings multiples north of 100x but rather half that (so still a ridiculous 50x), will wipe out approximately $100 of its share price or 35%. Even at 50x earnings it will still be more than double that of Disney (17x) and Apple (19.4x).

But the crucial key with any short position is timing. Downward momentum must be on your side at a time when competition is just starting to increase and make inroads. We have all of that on Netflix. Even though equity markets have been appreciating, Netflix share price has been steadily declining. That is not a positive sign and I believe really reflects the market “waking up” to the overvalued nature of the share price.

Technically speaking, Netflix on a longer-term basis has definitely stalled out. The past 12-months has seen the share price still hovering around the same levels as in early 2018 – not too dissimilar to how Tesla traded before this year’s decline. This in my view is part of the large topping process Netflix is currently completing. The 10-year weekly chart below shows a multi-year uptrend that incorporates many of the recent lows. This is a larger version of the trendline from 2015 which eventually broke and saw a sharp sell-off. A break of this trendline would bring into focus targets back into the $210/200 zone but as suggested earlier levels back to $180 are not out of the question on a valuation basis.

The long-term RSI supporting trendline that stretches back to 2012 is on the verge of breaking that will only confirm a serious longer-term correction is underway in price and permanently from a valuation perspective. There should be no reason why Netflix trades at over 100x earnings! 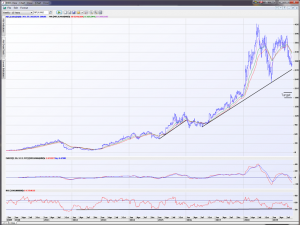 As you can see, while many stocks can seem overvalued and stretched in their price rallies, the real corrections typically come when there is a combination of extreme valuations and robust competition forming. This is when even the leaders begin to suffer. Its Netflix turn just as companies like Woolworths and Coles suffered when Aldi/Costco entered the Australian market, as the local telecoms suffered with heightened competition, Qantas vs Virgin. You even get it in sport – who remember’s Super League? There are typically few winners and least of all, the most overpriced and dominant player in the market who used to have it all their own way. *Cough* Afterpay *Cough* Wisetech *Cough*…….