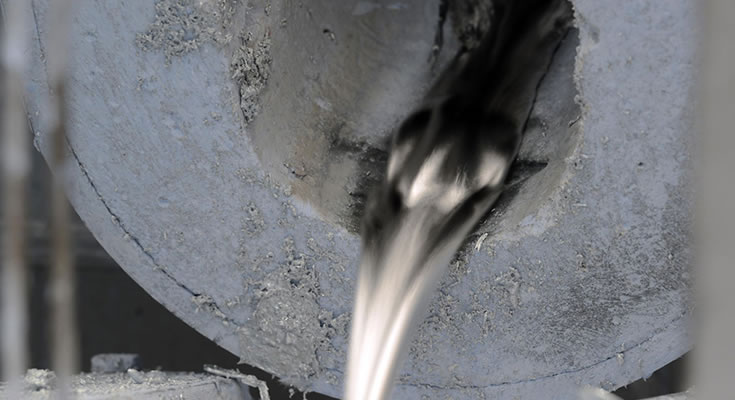 As a general rule, the most successful man in life is the man who has the best information.

Zinc and lead prices are movin’ on up again, following a two-week hiatus in the long-term trend of diminishing inventories in London Metal Exchange warehouses.

Zinc stocks plummeted from 900,000 tonnes (kt=1,000 tonnes) at the beginning of 2014 to around 120,000kt five years later – due to a rash of zinc mine closures over the past few years and tighter environmental restrictions in China, which is lessening the amount smelters can produce.

The result has been a record amount of zinc imported into the world’s largest metals consumer, 715,355 tonnes of refined zinc in 2018. The high demand in China has also pulled a lot of zinc out of LME warehouses.

In February zinc inventories fell to the point where there was less than two days’ worth of global consumption locked in London Metal Exchange warehouses. The paucity of the metal used to prevent rusting caused prices to spike to the highest they’ve been since last June. The supply noose loosened at the end of March, however, causing prices to fall, but they’re on the rise again. The trigger was 10,625 tonnes flowing into exchange warehouses, causing a price slippage to $1.27/lb, on April 16.

Two weeks of slack prices appear to over, though. The industrial metal has made a slow recovery from $1.29 a pound on April 19 to its current $1.32/lb. The story is much the same for lead. Due to smelting restrictions, China imported 128,000 tonnes of refined lead last year, the most since the financial crisis of 2008. For the first three-quarters of 2018, world refined lead demand outstripped supply by 110,000 tonnes, notes the International Lead and Zinc Study Group.

In February 2019, lead inventories in LME warehouses plunged by over a third, to their lowest levels since 2009, only enough to cover one week of global demand. Inventories in Chinese warehouse were depleted by 70%, as that country continued to curb output in the world’s biggest market for automotive lead batteries. A report by Wood Mackenzie quoted by Reuters, states that any primary lead smelter in China that fails to get its discharge permit this year will be shut down. Meanwhile secondary lead production is expected to keep contracting.

Just this week, it was reported that China’s demand for refined imports of lead and zinc are keeping pace with last year’s torrent; during the first three months of 2019, net refined zinc imports were up 2%, from 128,000 to 139,000 tonnes.

Zinc is the fourth-used metal today, behind only iron ore, copper and aluminum in terms of annual tonnage produced. Zinc’s main function is to galvanize metals. Adding a zinc coating to steel or iron protects it against rusting. In fact zinc offers a double layer of protection: the top layer serves as a barrier coating, the bottom layer actually attracts more oxidation than the underlying metal surface; when this layer becomes oxidized, it wears away, leaving just the top layer.

A high percentage of steel that goes into buildings and automobiles, is galvanized with a zinc coating, making it a highly-prized metal.

Indeed, making rust-proof cars could not take place without zinc. The metal is used in many stages of the assembly line, including engine parts, fuel systems and chassis, where components are plated with zinc. Zinc-coated parts are reportedly able to withstand up to 1,000 hours of salt spray testing.

Auto manufacturers in the US have, for the past 25 years or so, been using a zinc-nickel-alloy for plating. The nickel adds to zinc’s anti-corrosive properties, and provides a lustrous sheen.

Zinc alloys including brass are used in corrosion-resistant marine components and musical instruments.

While its primary use is to stop metal from rusting (for example galvanized steel used in automobile production or bridge-building), other applications are shoring up demand. Adding zinc to fertilizer increases soil productivity, and there is research being conducted to develop a nickel-zinc battery for use in electric vehicles.

The US Naval Research Laboratory is working with EnZinc, a California-based firm, on technology that the company’s founder said should be ready within the next two years.

Zinc, of course, is already used in alkaline batteries – a type of battery that gets its energy from the reaction between zinc and manganese dioxide.

There are also zinc batteries. Both zinc and alkaline batteries are useful for low-drain appliances like TV remotes and clocks. The difference between the two is the type of electrolyte – ammonium chloride for zinc batteries and potassium hydroxide for alkaline.

Generally, alkaline batteries have a higher capacity and a longer shelf life than zinc batteries. This is because with zinc batteries, both the casing and the anode are made of zinc; the casing is prone to leaks and eventually gets eroded away by the acidic electrolyte inside.

With alkaline batteries (which also contain zinc), the battery’s metal body is used to house the anode, which is in powder form ie. it doesn’t erode the casing.

Any discussion of zinc would be incomplete without a mention of its medical uses. Zinc is an essential mineral for the human body and zinc deficiency is a serious condition, remedied by zinc supplements.

Zinc is also used heavily in infrastructure build-outs. This includes desperately needed bridges, public buildings, power stations, dams etc. in the US, much of the developing world, and China’s Belt and Road Initiative which along with needing billions of tonnes of copper, is going to require a lot of steel containing zinc.

According to the American Society of Civil Engineers (ASCE), the US needs to spend $4.6 trillion between 2016 and 2024 in order to upgrade all its infrastructure to an acceptable standard. But only $2.6T has been earmarked, leaving a funding gap of $2 trillion.

Zinc is mostly used in steel fabrication to prevent rusting; it is an essential component of galvanized steel bridges; highways, railways, and high-rise buildings all use zinc.

We only need to look to China, once again, to see how the demand for zinc is poised to skyrocket. Beijing is keen to advance its ‘Belt and Road Initiative’ (BRI), consisting of a vast network of railways, pipelines, highways and ports that would extend west through the mountainous former Soviet republics and south to Pakistan, India and southeast Asia.

So far over 60 countries, containing two-thirds of the world’s population, have either signed onto BRI or say they intend to do so. According to the Center for Foreign Relations, the Chinese government has already spent about $200 billion on the growing list of mega-projects projects including the $68 billion China-Pakistan Economic Corridor. Morgan Stanley predicts China’s expenditures on BRI could climb as high as $1.3 trillion by 2027.

Zinc is among the metals China is looking to source from its 60-odd-country trading block. Beijing is willing to lend money to fund construction projects in nations such as Kenya, Laos, Peru, Sri Lanka, Greece, Serbia and the Philippines. These projects are sure to contain such mined commodities as copper, steel, zinc, etc.

The zinc market was in deficit in 2018. According to the USGS, despite new zinc mines opening in Australia and Cuba in 2017, and increased production at the Antamina mine in Peru, supply failed to keep up with consumption. The International Lead and Zinc Study Group states that global refined zinc production in 2018 was 13.42 million tons versus 13.74 million tons consumed, leaving a deficit of 322,000 tons.

Some very large zinc mines have been depleted and shut down in recent years, with not enough new mine supply to take their place.

MMG’s shuttered Century mine for example used to supply 4% of the world’s zinc. Between the shutdown of the Lisheen mine in Ireland, Century, and Glencore’s Brunswick and Perseverance mines in Canada, over a million tonnes was ripped from global zinc production.

The closed mines represent an estimated 10 to 15% of the zinc market. On the flip side, there have been few discoveries or big zinc projects planned. This is setting the zinc market up for a supply shortage.

The International Lead and Zinc Study Group predicts the zinc market will again be in a deficit position of 72,000 tonnes in 2019.

BMI Research noted in June 2018 that refiners, particularly in China, will have a hard time securing zinc concentrate, due to zinc mine production curtailments. Tightened environmental standards to deal with choking air pollution in China, meant that Zijin Mining cut 8.2% of its zinc production in 2017.

Chinese smelters rely heavily on imported zinc ore. In 2017 China’s refined zinc production was at its lowest in two years due to problems acquiring zinc concentrate.

“The world needs more zinc mines but we don’t have them because there has been no exploration. If you had all the expected development projects come on line at full capacity, analysts expect that demand will still outstrip supply by mid-2020,” he said. “This means there is a limited risk of further downside in the price long term.”

Wood Mackenzie states that zinc mine closures, attrition and demand growth will require 2.2 million tonnes of new mine capacity a year.

The majority of the world’s zinc deposits contain lead, meaning lead and zinc are mined together. Sphalerite is zinc’s main ore and is usually associated with galena, the lead mineral, and chalcopyrite, the copper mineral.

Zinc and lead mineralization generally occur together, within limestone, in veins associated with granitoids, and as volcanogenic massive sulfide (VMS) deposits. The latter can also contain precious metals.

VMS deposits are estimated to have supplied over 5 billion tonnes of sulfide ore. They currently account for 22% of the world’s zinc production, 9.7% of the lead produced, 6% of copper, 8.7% of silver and 2.2% of gold.

An estimated 900 VMS deposits are found worldwide, averaging about 17 million tonnes each. And they are still being formed, mostly along tectonic ridges where plate movements form cracks in the earth’s crust – allowing a conduit for ancient minerals to travel up through hot liquids and be deposited, through billowing white and black clouds, onto the sea floor.

The Iberian Pyrite Belt running through Spain and Portugal has about 90 VMS deposits, with some larger than 100 million tonnes. Large VMS mines are in Scandinavia including Boliden’s Garpenberg mine, a 120-million-tonne VMS monster.

They have long been recognized, by both majors and juniors, as potential elephant country – and because of their polymetallic content these types of deposits continue to be one of the most desirable because of the security offered against fluctuating prices of different metals.

They can also have long lives. The Kidd mine in Quebec, the deepest base-metal mine in the world, is a VMS deposit that has been in production since 1966.

To sum up, more zinc mines are needed to bring supply back into balance with demand, and they will most likely be developed from sulfide deposits. Remember 95% of mined zinc comes from sulfides.

I’ve got my eye on a company with a VMS deposit in Sweden that is getting excellent results from recent drilling. Boreal Metals (TSX-V:BMX) is aiming for discovery success by investigating past-producing mining areas.