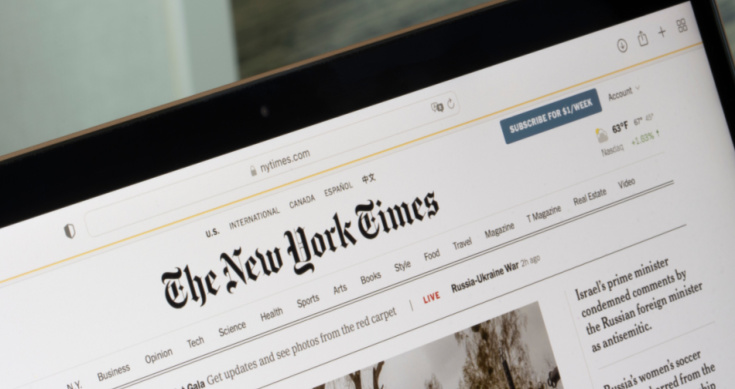 US investors are changing the way they view the New York Times Co (NYT) – and many other old line media companies for that matter.

Rather than judging them solely on the basis of traditional measures such as revenue growth, earnings growth, ad spend, costs and staff numbers, (and the quality of their product in the case of companies like the NYT), investors now are looking at their performance in a way similar to the way Netflix is now assessed.

The Murdoch clan’s News Corp has close to 5 million newspaper subscriptions outside of Foxtel’s Pay TV’s 4.2 million plus streaming subscribers and around 1.7 million core customers for the Pay TV business).

Both would be considered by many investors to be old-fashioned industrials, but their growing subscriber numbers mean they have been put in the same boat as much larger groups such as the fading Netflix, and assessed in similar fashion.

The new way of assessing these companies has seen share prices slide more than 30% across the board so far this year because of the perceived weakness in the streaming/subscription model that first emerged with Netflix in January and has spread to the entire US media sector.

Subscriber numbers now stand at 9.17 million and subscription numbers at 10.56 million – the difference is due to many subscribers having two or more subscriptions – news plus cooking and puzzles for example. (The company’s 1.2 million new subscribers from The Athletic were first included in its Q1 2022 results).

News only digital subscribers totalled 6.1 million at June 30, up a solid 14.8% from June, 2021 but only 39,000 more than the figure at the end of the March quarter this year – a sign of a slowing. The latter was judged as weak bit of data.

Average revenue per user fell 7.5% to $US8.83 from a year ago and down 3.3% from the March quarter – another worrying sign for investors and analysts.

Print subscriber numbers are still broken out and they fell more than 6% over the year to June to 760,000 copies a day. The June quarter figure was also down from the March quarter average of 780,000.

The company reported revenue up 11.5% year on year to $US555.7 million but operating profit down $US7.2 million to nearly $US52 million thanks to losses at The Athletic website which was acquired earlier this year.

Subscription revenues rose 13.1% year-on-year to $US383.6 million, “primarily due to growth in the number of subscribers to the Company’s digital-only products and the benefit from subscriptions graduating to higher prices from introductory promotional pricing, as well as the inclusion of subscription revenue from The Athletic,” the company said.

Ad revenues – both print and digital were weak (and are forecast to again weaken in the current September quarter).

Advertising growth of 4.1% in the quarter was driven by print advertising, revenues for which increased 15.1% to $US48.1 million, but that strong growth wasn’t enough to see print ad revenues overtake those from digital ads, even despite a fall of 2.4% in digital ad revenues to just over $US69 million.

The company said that digital advertising represented 59% of its total ad revenues in the June quarter, down from 63% in the same quarter of 2021.

“Digital advertising revenue decreased primarily as a result of the macroeconomic environment, a reduction in marketer spend on advertising adjacent to news coverage given the current news environment, and fewer programmatic advertising impressions,” the company said. “

Print ad revenues rose because of the bounce back of spending by those sectors – primarily in the entertainment and luxury categories, which were more severely impacted by the Covid-19 pandemic in the second quarter of 2021, the NYT Co said in the release.

The gloom about digital ad spending in the global media flows from the weak figures from Google, Facebook (owned by Meta), Snap and Twitter as the slowdown in activity starts to erode ad revenues.

The New York Times Co forecast a drop in advertising revenue for the third quarter as a result of the spending cuts by brands.

“Given the uncertain macroeconomic environment, we’ll continue to look closely at costs while prioritising investment in areas that widen our moat like journalism and digital product development,” the Times’ CEO Meredith Kopit Levien, said on a post-earnings call with analysts.

News Corp releases its June data on Monday (US time). The US listed shares of News Corp are down 26% so far this year as the market takes a harder look at its performance so far as subscriptions and digital revenues are concerned.