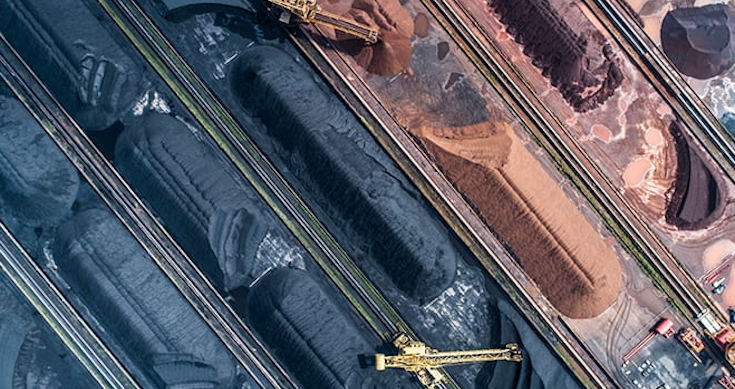 A Time for Everything

For the first time in many years, the words “commodity” and “super cycle” are being used in the same sentence. In this article, we will review the recent moves higher in commodity markets in a longer-term context, the sustainability of the tailwinds supporting this, and consider whether this is indeed the start of a longer term upcycle in commodity markets. Is it time for commodity markets to shine?

We will also look at the ramifications of a continuing breakout in commodity markets, and how the application of a time series momentum (trend-following) strategy can take advantage of changes in commodity market regimes and provide potential protection against inflation for a portfolio.

Commodity markets have well defined cycles over time, and this is particularly evident when looking at the relative returns of commodities compared to other growth assets. The measure that we have used over several years to highlight the cyclical nature of commodity markets is comparing the rolling five-year annualized returns of global stocks and commodities (Exhibit 1). The series is mean reverting and highlights the points at which commodity markets are relatively ‘cheap’ when compared to global stocks. This is best explained by the underinvestment in commodity markets that establishes a cyclical low in downturns, and eventual oversupply at the end of a cycle.

Exhibit 1: The potential for mean reversion in commodity prices is significant

It is also noteworthy that this measure typically leads or lags peaks and troughs in both commodity and stock markets, with commodities hitting a cyclical high in the middle of 2004 (four years before commodities peaked) and basing in December 2015, a number of years prior to the lows seen in March 2020.

While there has been a recent pickup in the calls of a new commodity super cycle, we would instead characterize the recent increase in commodity markets as a longer-term reversion to what would be ‘fair value’ relative to global equities. Whether this is the start of a super cycle or not is less relevant than the simple fact that should history be any guide, this current cycle of commodities outperforming global stocks should persist for a number of years. In our view, this provides an attractive option for investors seeking to diversify portfolios and protect against an outbreak of commodity price inflation.

Longer-term cycles in the US dollar

Exhibit 2: The US dollar/commodity cycle relationship

A final observation that lends support to the hypothesis that commodity markets have entered a new bull cycle is gleaned from looking at the forward curve of each commodity market and the BCOM Index as a whole. The positive change in supply demand fundamentals across the commodity complex is illustrated by the positive roll yield now available to commodity investors (currently just under 4%).

Exhibit 3 shows the historic one-year roll yield on the index (sector weighted), currently at the highest level in over 15 years, with broad-based backwardation evident in most underlying commodities. The current level of backwardation serves as a meaningful tailwind in the absence of any market shocks. Whilst commodities bottomed on a relative basis at the end of 2015 (per Exhibit 1), the negative oil price that occurred in April 2020 was very likely the absolute base for this commodity cycle. To misquote T.S. Eliot: “This is the way commodity markets bottom, not with a whimper but a bang.”

Exhibit 3: BCOM has seen its lowest and highest one-year roll yields in 15 years

Are the catalysts for a ‘super cycle’ in place?

Longer-term cycles provide a broad top down view of the potential forward trajectory of commodity markets, but this does not in and of itself provide the fundamental basis for a sustained rise in broad commodity markets. A genuine, multi-year bull market cycle in commodities requires enough catalysts where a demand shock occurs during a period of inherent supply constraints. Without giving a detailed view of these factors, we believe the current environment provides the potential set up for higher prices in those key commodity markets that make up a large proportion of commodity indices.

The following drivers support a hypothesis of a multi-year bull market cycle in commodity markets:

In an environment of sustained increases in commodity prices and a potential breakout in inflation, is there an anti-fragile strategy that benefits from this potentially difficult market regime?

Persistent inflation and the impact upon real returns

Commodity markets are one of the primary sources of cost push inflation; the current regime of central bank accommodation and a desire to achieve a persistently higher level of inflation has the potential to erode real returns for financial assets. There have only been a handful of these environments in the last 100 years, the last of which was in the 1970s. The floor on inflation remained at 3% during this period, with two periods of breakouts coinciding with increases in commodity prices – in particular oil and gold. Whilst real returns for both stocks and bonds was negative for this period, commodity markets produced outsized returns.

Central banks are currently adopting a strategy that is extremely accommodative to liquidity and accepting higher levels of inflation for a sustained period. Whilst there is no guarantee that central banks will achieve their objective of a gradual increase in inflation, there is potential for inflation to break out in a disorderly manner. In such an environment, is there a strategy that benefits from this regime shift and can potentially protect against the loss of real returns on financial assets over a sustained period of commodity price inflation?

Trend following: a potential solution to protect against sustained inflation

In a broad based, multi-year commodity bull market cycle, a trend-following strategy is one potential tool that can help to mitigate the erosion of real returns other asset classes. Trend following has well-documented potential to generate ‘crisis alpha’ in sustained market shocks across all major asset classes.

It is possible to provide some context around the potential for such a strategy to provide dynamic protection for a diversified portfolio in an environment of rising inflation. Looking at the same period of higher inflation in the 1970s, we model a simple trend-following strategy on a commodity index and include an allocation of 5% commodities with the remaining 95% allocated to a theoretical 60/40 portfolio. The strategy takes direction (long/short) positions on the commodity index, based upon 12-month price momentum, i.e. long (short) positioning where current prices are higher (lower) than those 12 months ago.

As Exhibit 5 shows, this model strategy would have offset some of the impact to performance of those periods of higher inflation.

Exhibit 5: A trend-following allocation to commodities – impact on real returns

In our view, the cyclical nature of commodity markets, in combination with current fundamental conditions, provide tailwinds for commodity markets to move sustainably higher over a longer time horizon. This positive backdrop, however, brings with it the potential for a sustained increase in inflation, supported by central banks content with implementing policies that are attempting to achieve higher consumer price index (CPI) outcomes on a multi-year basis. In this environment, a trend-following strategy that takes positions in all asset classes including commodities has the potential to provide a high degree of protection to a diversified portfolio that would ordinarily be adversely affected by such an environment.