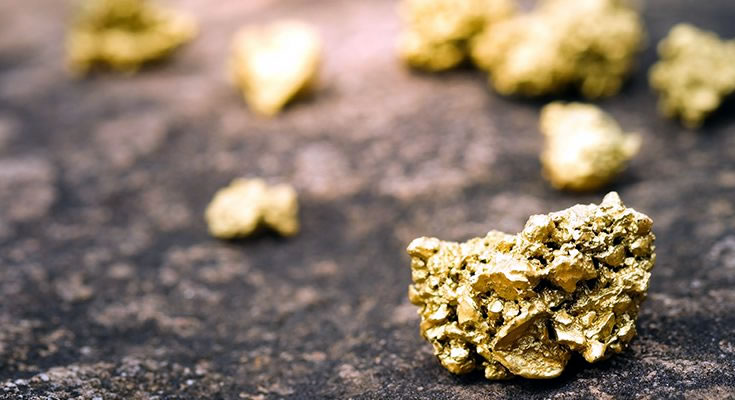 New style of PGE-copper-gold mineralisation intersected over wide interval below the extended high-grade G1-G2 zones at Gonneville, plus two new high-grade target areas to be tested.

We initiated coverage of CHN during March 2019 due to CHN’s involvement in the burgeoning Victorian gold exploration scene. CHN’s primary focus has been its 100%-owned Pyramid Hill Gold Project, a 5,190 sq km district-scale holding within the reinvigorated Bendigo gold district. The region that has produced more than 60M oz of high-grade gold, yet has seen minimal exploration under shallow cover. CHN has actively explored the project since 2018, outlining several large-scale targets from shallow reconnaissance drilling. Since March 2020, the company has enjoyed immediate exploration drilling success at its Julimar nickel sulphide project in Western Australia, where it has outlined an outstanding discovery. CHN importantly is self-funded when it comes to exploration, not having raised capital since 2011, generating net proceeds of >$100m from asset sales, with more than $36mn returned to shareholders since 2012.

Three rigs (two RC and one diamond) are currently drilling at the Gonneville Intrusive, where CHN recently made a high-grade Ni-Cu-PGE discovery during March 2020. Drilling results continue to demonstrate that the intrusion hosts both extensive high-grade PGE-Ni-Cu-Co zones in massive/matrix/stringer sulphides, as well as widespread PGE mineralisation in disseminated sulphides. The latest results highlight the potential for continued growth of the high-grade massive/matrix/stringer sulphide mineralisation.

CHN is continuing with its dual approach of targeting both extensions of known high-grade PGE-Ni-Cu-Co zones (G1-G3) with 40-80m spaced step-out drill holes, as well as scoping out the extensive zones of PGE-rich disseminated sulphides on a 200m x 80m spaced grid.

The hole is significant because this new zone represents a new style of high-grade PGE-Cu-Au mineralisation at depth at the Gonneville Intrusion. Significantly, the hole has ended in mineralisation, with this newly-discovered zone open in all directions. Importantly too, down-hole EM completed on JD005 has identified an extensive ~800 Siemens EM conductor that corresponds with this new zone.

CHN is of the view that previous nearby drill-holes were too shallow to test this horizon elsewhere within the Gonneville Intrusion. Accordingly, a diamond tail is currently being drilled on JRC005, ~80m east up-dip of the intercept. 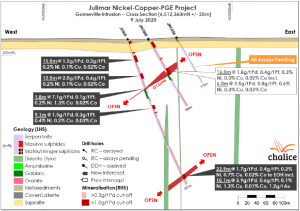 Hole JD010 – was drilled ~40m south of the discovery hole to test the southern extension of the G1 zone and to test a 7,000 Siemens EM conductor identified from the recent infill MLEM survey.

The hole has intersected a ~15m wide zone of mostly matrix sulphides with narrow massive sulphides from ~81m down-hole at the projected intersection of the modelled EM conductor. This has resulted in a modified interpretation of the G1 and G2 zones, with the discovery zone (G1) now interpreted to continue both to the north-north-east and south over a strike length of ~400m, with assay results awaited.

Importantly, JD010 has confirmed that the G1 zone is open to the south. Recent auger soil geochemical sampling over the entire Gonneville Intrusion has identified highly anomalous PGE-Ni-Cu-Au in soils over a ~650m x 250m area at the southern end of the Intrusion. A peak Pd-in-soil value of 14.1g/t Pd was obtained immediately south of the discovery hole JRC001.

A large MLEM conductor (Conductor ‘F’) was previously identified in the area and as such, the area has been confirmed as a high-priority target. Permit approval for drilling was recently obtained and RC drilling in that area has commenced. 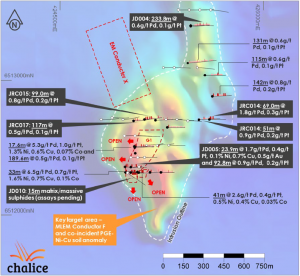 CHN’s share price has surged from a 12-month low of $0.135 to a recent high of $1.375 – so the significance of the company’s Julimar drilling in Western Australia, together with its Victorian gold drilling activity, has not been lost on the market. We initiated coverage @ $0.16 during March 2019.

Now, we see drilling identifying a new style of PGE-copper-gold mineralisation below the extended high-grade G1-G2 zones at the Gonneville Intrusion.

Importantly too, CHN is cashed-up and so unlike the majority of its exploration peers it doesn’t have to concern itself with trying to raise exploration funds in somewhat difficult market conditions. CHN maintains cash reserves of ~$45 million.