“It has been a giant system failure. Central banks can’t reduce liquidity, otherwise markets fall apart. The process of never letting markets correct themselves is producing valuations across the economic spectrum that are worse than in 2000, as household wealth (concentrated among the top 10%) relative to GDP has reached unprecedented levels.” – Sven Henrich

The prophecies of doom and gloom that accompanied the mid-March COVID-19 crash have seemingly vanished. They have been vanquished by the Federal Reserve’s promise to do “whatever it takes” to support financial markets – all financial markets.

What this means is that the Fed is now buyer of first resort, last resort and every other resort in-between. The “Fed put” that created a floor under stocks following the 2008/2009 recession has morphed into an “everything” put, creating floors under everything. As a result, money has surged back into equities, as investors see the Fed backing markets. 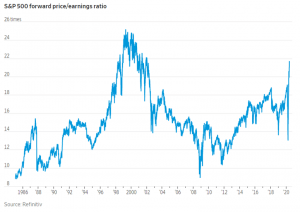 “Don’t fight the Fed,” once a favourite saying of stock market traders, has taken on a whole new meaning. US investors are not only snapping up stocks, they are buying up all sorts of corporate debt, confident that the Fed will be there to bail them out should things hit another rough patch.

Combine the Fed’s “everything” put with FOMO (fear of missing out) and you get arrive at the situation that is powering stocks right now. The problem is that the Fed is now a persistent presence in financial markets, unable to step back in any major way since the GFC.

As Desmond Lachman describes it: “One has to regret Federal Reserve Chairman Jerome Powell’s seemingly partial diagnosis of our present daunting economic challenge, especially considering his key role in defusing the crisis. In Powell’s view, our economic predicament has nothing to do with the possibility that years of ultra-easy U.S. monetary policy might have contributed to the creation of worldwide asset and credit market bubbles. Rather, he seems to believe that our economic challenge is solely the result of the supply side shock delivered to the economy by the coronavirus pandemic.” 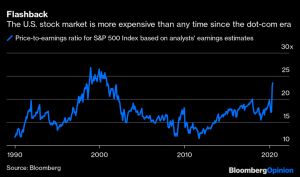 This mindset has allowed investors to ignore warnings about the health of corporate earnings. COVID-19 is expected to reduce overall US stock market earnings by about 20%, giving the S&P 500 a forward PE of 21.6. This is 24% higher than the market’s 17.4 forward PE the last time stocks were at these prices during October 2019. A bigger-than-expected decline in earnings will increase the market’s forward PE even more, rendering it even more expensive.

Given the growing chorus of protest in the US and elsewhere, it’s also worth reflecting on the socio-economic aspect of the Fed’s policies. While the Fed’s “everything put” did its job and stopped the March meltdown that threatened the US economy, it has also created a monster.

When the Fed lowered interest rates to zero, they made it impossible for savers to get ahead, forcing them into risk assets like stocks. The only losers are those not wealthy enough to play the game.

Like its remedy for the 2008/2009 crash, the current intervention has disproportionally favoured the richest Americans at a time when US unemployment could rise as high as 20%. A 20% unemployment rate not only means a fifth of the nation will be without an income; it will also leave the bulk of this group without healthcare. 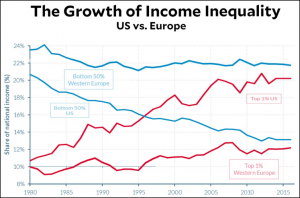 Income inequality has played a big role in the political civil war raging in the US since the last recession. Nearly half of Americans don’t own shares, so rising stock markets do nothing for them. The richest 10% of Americans own 84% of stocks. The current rally is not helping most of the 20 million people who lost their jobs in April, or the millions more in May.

The Fed was created to protect the banking system. It does not have the tools to address the economic and social issues exacerbated by the COVID-19 virus – hence its solutions bypass the typical American. The Fed’s “everything” put is working like a charm for some, but it is definitely not working for everybody.

The Fed’s actions didn’t work for the common man during the 2008/2009 recession either. Banks got bailed out, but Main Street didn’t. “Occupy Wall Street” protests sprung up everywhere. It took years for the Fed’s actions to directly impact the well-being of most Americans.

Which brings us to gold. Although the pandemic-related monetary and fiscal packages have produced a remarkable sharemarket recovery, the real economy remains in a fragile state. The Fed has cautioned that it expects the economic damage from the pandemic to be long-lasting and profound. The Fed has also warned that as highly leveraged companies fail, it will amplify the economic downturn as companies lay off workers and cut investments. 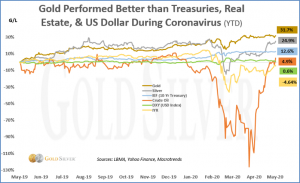 Gold has performed strongly so far during the COVID-19 epidemic. It has not only provided a hedge, it has outperformed all major US stock indexes. Even silver has performed better than the Dow and S&P 500. And it isn’t just stocks – gold has outperformed real estate, the US dollar, and even Treasuries. Through May of this year, gold had risen more than all major asset classes. 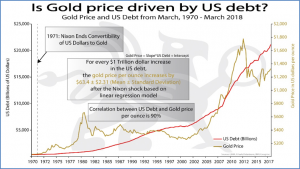 If we refer pack to the post-GFC environment, gold hit record highs above $1,900 on the back of ballooning debt and increased money supply. Indeed, gold has a solid link to underlying debt levels most of the time. If we look at the situation today, since the beginning of the year corporate debt issuance has now exceeded $1 trillion (more than all of 2019), with no signs of slowing in the midst of one of the worst economic backdrops ever.

Interestingly, silver is playing catch up to gold, which is giving silver bugs cause for optimism. It was not only the best performing major metal during the month of May, but it’s also seen extending gains on both its traditional haven status and as investors turn to riskier assets. 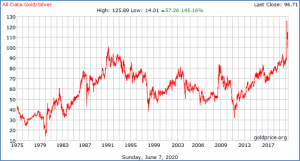 After a massive sell-off that pushed the ratio to gold to a record in March, silver gained by 14% in May. Are there lessons to be taken from silver’s performance post-GFC that can be applied today? Silver quadrupled in price from $10/oz to $40/oz between 2008 and 2011, significantly outperforming gold. Over that period, the gold silver ratio fell to a low of 30 (currently at 96 and coming off a recent all-time high of 125).

There is a remarkable disconnect between Wall Street and Main Street. Markets have rallied sharply due to the unprecedented amount of liquidity injected into them, while most investment funds remained underweighted, and are now being forced back into the markets. The economic and financial damage will be long-lasting and will provide ongoing support for the current precious metals rally. Gold and silver have a major role to play and there is strong upside potential with respect to both, especially if we use their post-GFC price performances as a guide.