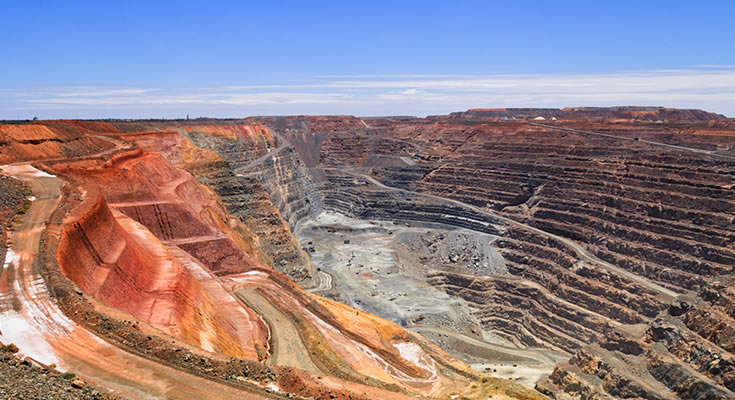 A geological “stone’s throw” from Cadia Valley, under-the-radar micro-cap Krakatoa Resources is steaming ahead in its hunt for porphyry copper/gold systems in the prolific Lachlan Fold belt in NSW.

Although now out of Indonesia, Krakatoa wants to hang on to its name.

And with most people having at least a vague association in their minds of Krakatoa as the “Big One,” that could be apt, too.

“With the giant Cadia Valley only 35 kilometres to our south, in the same rocks, along-trend and in the same volcanic belt, we’ve steered our investors into a staggering leverage scenario,” says Locke.

‘Remarkably, our ground has never been drill-tested, so we are teaming up with investors to change all of that. Recently, we finished our maiden air core drilling programme designed to detect any rumblings that may point to a porphyry system below,” Locke adds.

Krakatoa Resources is now focused on the East Lachlan Fold Belt in New South Wales, Australia’s second-largest gold-endowed region and sole economic source of porphyry copper-gold deposits. World-class discoveries over the last 20 years include Newcrest Mining’s Cadia mine – Australia’s largest gold mine, with a mineral resource of 38 million ounces of gold and 8.3 million tonnes of copper, and a current reserve life of about 24 years – as well as CMOC-Sumitomo’s Northparkes mine and Evolution Mining’s Cowal mine

In October 2019 – with the Indonesian gold opportunity for which it was formed, a distant memory – Krakatoa exercised the option it had held since September 2019, to buy the Belgravia Project.

The Belgravia Project covers an area of 80 square kilometres in the central part of the MVB, right in the heart of Australia’s porphyry discovery centre, exemplified by the low-cost, long-life gold-copper Cadia East Project, which lies just 35km to the south. (See the map below, showing the sought-after address of the north/south-trending Molong Volcanic Belt:) 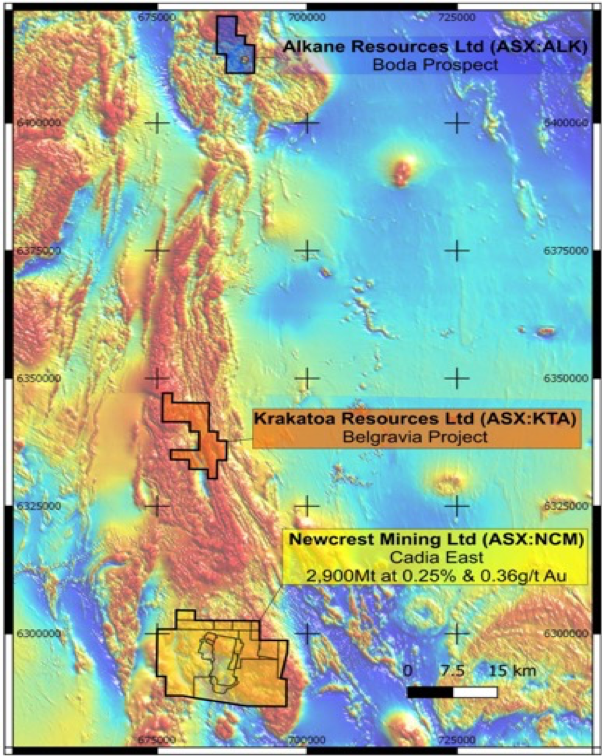 Belgravia has six initial targets considered highly prospective for porphyry copper-gold and associated skarn copper-gold: the first three are Bella, Lara 1 and Lara 2, which are part of the Copper Hill and Larras Lee Igneous Complexes. The Copper Hill complex hosts the eponymous copper-gold deposit just 1.5 kilometres west of the Belgravia ground, and is the subject, under the current owner, of a pre-feasibility study.

Importantly, the three targets in the Bell Valley Target Area lie in the same rocks that host Cadia and Alkane Resources’ Boda discovery, the latter of which set tongues wagging in September 2019 with what appeared to be a bonanza porphyry copper-gold find. The initial excitement was confirmed in February, when follow-up drilling hit almost 700 metres of mineralisation.

Krakatoa is not so much hoping for a bit of “nearology” – it believes it deserves some “nearer-ology.”

“Right next to Boda is ground belonging to a Magmatic Resources (MAG), which currently has a $28 million market capitalisation, which to us, appears to be based on pure ‘nearology’ to Boda. We’re closer to Cadia than Alkane , and we also share the same rocks, so at a $6 million market cap, we think we’re a candidate for a bit of ‘nearer-ology,’“ says Locke.

There is far more substantial backing than that for a market-cap uplift. This week (17 March) Krakatoa announced the completion of its maiden aircore drilling program at Belgravia, which confirmed the presence of geology associated with both porphyry copper-gold and epithermal gold deposits. Krakatoa is eagerly awaiting the assay results.

“You know, Boda’s discovery hole was 502 metres at 0.48 grams per tonne (g/t) of gold and 0.2% copper, and that hole added about $200 million in market capitalisation on to Alkane,” muses Locke (the shares jumped more than 27% on the news.)

“Let’s not forget that we are next to Copper Hill, with one hole, of many, which is 60 metres at 5.4 g/t gold and 1.83% copper: hence the mineral payload is significantly greater than what they’re talking about at Boda. And Copper Hill has never been tested at depth – it hasn’t been tested at all below 350 metres. That’s what excites us the most about our property,” he adds. And Krakatoa doesn’t lack ambition: “It’s no secret, we’re looking for another Cadia and we have the right exploration team to do it,” admits Locke.

Up his sleeve, Locke has the Turon gold project also in the Lachlan fold , which covers an area of 120 square kilometres, situated about 50 kilometres east of Belgravia. Historic rock chips at Turon include an eyebrow-raising 1,530 g/t gold, 150 g/t and 60.6 g/t.

KTA shares are currently trading at 3.2 cents (for a market cap of $7 million), up from a recent low of 2.6 cents and a pre-Coronavirus high of 5 cents.