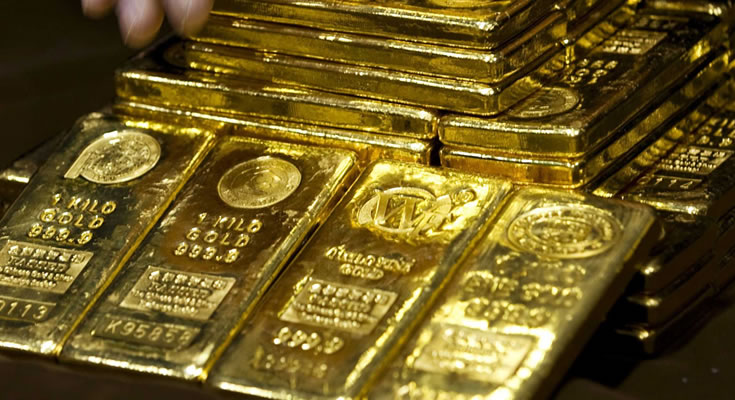 If there was ever any doubt that gold’s primary function is as a safety hedge against geopolitical and economic uncertainty, the events of the past few weeks should satisfy even the most stubborn sceptic.

The recent 5% pullback in the gold price (as seen in the graphic below) was likely a result of a technically overheated market condition, coupled with heavy profit-taking after the precious metal hit a multi-year high. 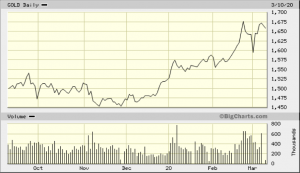 The emergency cut of the Federal Reserve’s benchmark rate has given gold yet another new lease on life. After gold’s recent price plunge, the yellow metal has come roaring back to life over the past week as economic uncertainties related to the COVID-19 virus have decimated world equity markets.

While the dust appears far from settling from market’s coronavirus panic, now would be a good time to assess the widespread damage and the most likely outcome for gold as it pertains to this panic.

For starters, gold is the best-performing asset of 2020 so far and the only one with a net gain. The extent to which gold is outperforming other major asset categories is shown in the graphic below.

Normally, gold’s intermediate-term prospects are closely tied with that of the oil price – but with deflation (or disinflation) threatening the global economy in the coronavirus’s wake, gold is being propelled higher strictly on flight-to-safety concerns. In other words, gold is fulfilling its major purpose of being a hedge against economic uncertainty – and this more than anything else explains gold’s disconnect with the crude oil price – a situation exacerbated by the Saudi Arabia-Russia supply bust-up. 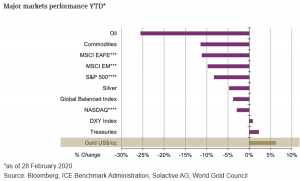 An additional factor that has helped propel gold prices higher is the fact that bonds are offering practically no competition with the yellow metal right now. Investors have ploughed cash into US government bonds as they braced for the global economic fallout from coronavirus and a brutal oil-price war between Saudi Arabia and Russia.

Surging demand had driven up the price of US Treasuries, dragging down their yields and sending the entire yield curve below 1% for the first time ever. The yield on the benchmark 10-year Treasury has touched a record low of less than 0.4%, while the 30-year Treasury yield has slid below 1% – an unprecedented event.

The falling curve underscores the worsening outlook for the world economy, as it signals the market is worried about a global recession and aggressive monetary easing by the US Federal Reserve. When interest rates fall, bond prices tend to rise – driving down yields – as investors chase a better return by moving money into government bonds, instead of keeping their cash in the bank.

The scale of the latest yield declines suggests that investors expect the Federal Reserve to cut interest rates again. The US central bank made an emergency cut of 50 basis points to interest rates last week to shore up the economy against coronavirus. Indeed, futures signal that investors put the odds of another cut this month at 100%, according to Reuters.

With rates already at 1% to 1.25%, the Fed has little scope for further cuts before they hit zero. The yield declines also suggest investors are expecting the Fed to boost liquidity in market by ramping up its bond purchases, which would drive up their prices and lower their yields. 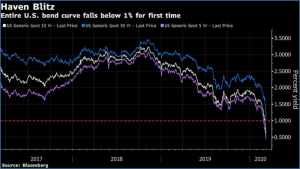 For gold investors, however, plunging bond yields are good news – in that the opportunity cost of holding bullion vis-à-vis sovereign bonds has fallen drastically. Because bonds no longer offer a significant yield advantage over gold, investors are feeling greater confidence to park their cash in gold until all threat of a global recession has disappeared.

Another near-term support for the gold price is the lingering uncertainty over the U.S. financial market outlook. This is closely related to the interest rate outlook, and on March 3 the Federal Reserve made an emergency cut to its benchmark rate of 50 basis points – the largest rate cut since the 2008 credit crisis.

While Wall Street had expected the Fed to cut rates at its March 18 policy meeting, the extent of the surprise cut may have made traders nervous, since it implied the Fed sees potential danger ahead for the economy.

But another explanation is that perhaps the market wanted even more in the way of stimulus from the Fed. According to an MSN news report: “Traders had already priced in a rate cut of 50-basis points by this month’s policy meeting. Fed Chairman Jerome Powell noted the central bank was not prepared to use any additional tools to stimulate the economy aside from rate cuts. This may have disappointed some on Wall Street who were expecting something more from the central bank.”

While equity traders were alarmed by the emergency rate cut, it was music to the ears of gold investors. For the stock market’s negative reaction to the Fed’s policy action was affirmation that abnormal financial market volatility remains a serious risk going forward, and this should provide an additional boost to gold’s safe-haven demand. The discrepancy between the performance of the Dow Jones Index and the gold price over the past 12 months is clearly illustrated in the graphic below. 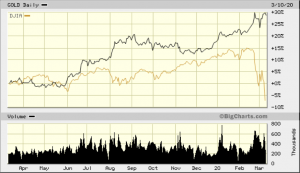 Even if there is an abatement of the coronavirus’s destructive force over the coming weeks and months, gold will benefit from a sustained low-interest rate environment. With rates low and unlikely to witness a major rebound anytime soon, gold safe-haven demand is likely to remain high.