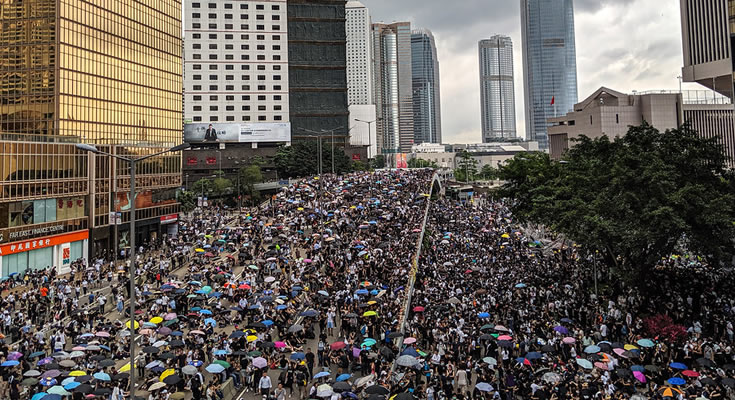 Hong Kong has confirmed that the months of protests and growing violence has plunged its economy into its first recession for a decade.

Data issued late on Friday showed the economy contracted by a sharp 3.2% in the three months to September, after a fall of 0.4% in the June quarter, meaning the economy is in a technical recession (which is two consecutive quarters of negative growth).

From a year earlier, the economy contracted 2.9%, after a rise of 0.5% in the June quarter.

The slide has been a long time coning – exports have fallen, retail sales have slumped, consumer spending is weak and tourism has slumped after months of confrontation between police and protesters.

The Hong Kong stock market though has been more resilient, while it fell 4.8% last week, it remains up by just under 2% for the year to date a reading that seems at odds with the daily violence between protestors and police and the continuing bad economic news.

Adding to this pressure is China’s economic slowdown and the prolonged trade dispute with the US and Donald Trump.

August retail sales were the worst on record – down 23% from a year earlier – while September’s slumped 18.3%.

Business activity fell to its weakest in 21 years in October, according to IHS Markit, while demand from mainland China declined at the sharpest pace in the survey’s history – which started in July 1998.

The coming week looks like being politically charged in the lead up to the District elections in Hong Kong on Sunday. The results will tell us if the increasingly violent protests by democracy and student groups have damaged their standing with Hong Kong voters.

A strong showing by the protest groups will embolden them and could see a stepping up in violence and demonstrations.