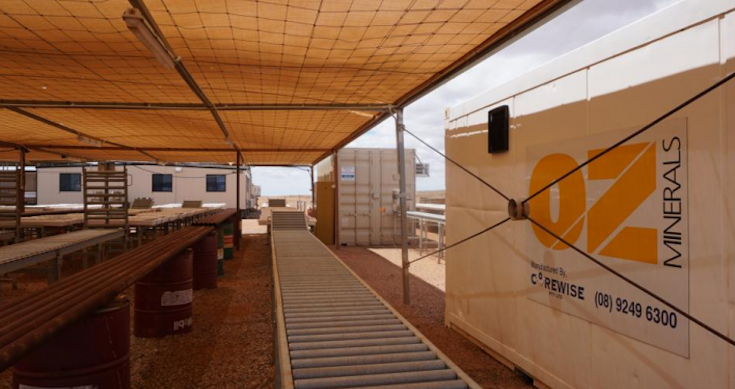 We knew that OZ Minerals had a top tier copper gold mine at Prominent Hill in South Australia after the mid-year $600 million expansion plan of the underground shaft, but on Tuesday we got a clear sign that the miner has a prospect in WA that could end up as a third mine for the company (along with the Carapateena mine, also in South Australia) with a decision possible on an investment for this one in a year’s time.

OZ released figures on Tuesday that revealed Prominent Hill’s underground ore reserve increased by approximately 26% to 48 million tonnes (Mt), with copper up about 27% and gold up about 31%.

Analysts point out that miners do not fully delineate a known ore body while mining is underway – companies just keep updating the size and quality of the resource in place on a proven and indicated basis to confirm the longer-term viability for investors and banks.

“Increases in mineral resources (at Prominent Hill) … were primarily due to the inclusion of information from additional delineation and grade control drilling completed, offset by depletion of existing surface stockpiles and ongoing mining of the underground mineral resource,” OZ Minerals said on Tuesday.

Prominent Hill’s ore reserve stockpiles dropped 20% to 12 million tonnes at June 30, 2021, with copper down about 17% and gold down about 38%. This was after OZ Minerals completed stockpile processing at the mine.

CEO Andrew Cole was upbeat about the drilling campaign at Prominent Hill.

“The 2020/21 drilling program at Prominent Hill, focussed on infill drilling to convert material from inferred to indicated resources.

It resulted in an increased confidence in our orebody knowledge and informed the approval of the Wira shaft mine expansion,” he said.

“The expansion will see a long and productive future for Prominent Hill with the Wira shaft enabling access to areas previously thought uneconomic and opening up potential new prospects.”

OZ Minerals said that about 67 million tonnes of mineral resource remained outside the Wira shaft expansion mine plan, which the company hopes to convert to ore reserves in coming years.

In August OZ Minerals has approved a $600 million investment in the Wira shaft mine expansion at the Prominent Hill that will extend Prominent Hill’s mine life to 2036 at six million tonnes of ore produced a year.

It will result in an estimated 23 per cent annual increase to copper production at a 20% drop in operating cost.

But from a future development point of future, the update on West Musgrave is looking more promising.

Tuesday’s statement from the company revealed that West Musgrave saw a boost, with an updated ore reserve of 253 million tonnes at 0.35% copper and 0.32% nickel.

“The ore reserve tonnes have increased by approximately 15 per cent and were due to the net result of updated operating costs based on increased throughput opportunity, metallurgical test work, and changes in metal price and exchange rate assumptions,” OZ Minerals said in the ASX filing.

The company completed 47.5 kilometres of infill drilling at West Musgrave during 2021, with the aim to increase orebody confidence.

“It is pleasing to see the contribution of our growth projects with significant increases of the mineral resource and ore reserve at both Prominent Hill and West Musgrave adding approximately five per cent to group ore reserve copper metal tonnes over the last 12 months,” OZ Minerals CEO Andrew Cole said.

“The 2021 drilling program at West Musgrave will inform an updated Mineral Resource and Ore Reserve in 2022 which will help support a potential project investment decision, expected in the second half of 2022.

“The project continues to fulfill its ambition as a low carbon, low-cost, long-life copper and nickel mine. A drilling program at the Succoth copper deposit commenced in September 2021 and will inform a 2022 update to the current Inferred Mineral Resource estimate totalling 156Mt at 0.6% Cu, which can potentially add upside in mine life or production rate to the West Musgrave Province,” Mr Cole said.

There was no update on the Carapateena in South Australia, but work is underway on finishing one for next year’s ore reserves release.

OZ said in its report to the ASX: “The Carrapateena Mineral Resource and Ore Reserve has been updated with depletion from mining up to 30 June 2021.

“A drilling campaign of ~35 kms, designed to enhance understanding of the mineralization, structural influence and stress regimes within the wider resource is in progress and was ~30% complete as at 30 June 2021.

“The drilling campaign is expected to be completed in Q1 2022 with information collected incorporated in an annual updated Mineral Resource and Ore Reserve in Q4 2022.”

“At Carrapateena we have been focused on developing the upper levels of the sub level cave whilst managing cave propagation. We remain confident in our orebody knowledge with very good reconciliation of our resource model through to the plant. An extensive drilling program currently underway will provide sufficient information to update the Carrapateena Mineral Resource and Ore Reserve in 2022.” Mr Cole added.