Amcor has just announced a merger with Bemis, a US based flexibles packaging company. The new entity will be the global leader in plastics packaging with a market cap of around US$17 billion, annual revenue of US$13 billion and earnings before interest and tax (EBIT) of US$2.2 billion. But after looking at the deal, we wonder if Amcor has paid too much.

Amcor management has been touting the merits of the deal, which it says will generate earnings per share (EPS) accretion of over 10 per cent with synergies expected to be in excess of US$180 million a year by the third year after the merger is completed.

While the EPS accretion might seem attractive, the deal marks a turning point in the company’s strategy, turning away from its target return on capital employed from acquisitions by year three.

The price paid by Amcor shareholders for the operating earnings (EBIT) of Bemis is a notional total of US$7.15 billion once Bemis’s net debt and unfunded pension liabilities are added to the market value of the Amcor shares as well as transaction costs and an estimate of the one-off costs required to realise the forecast synergies. 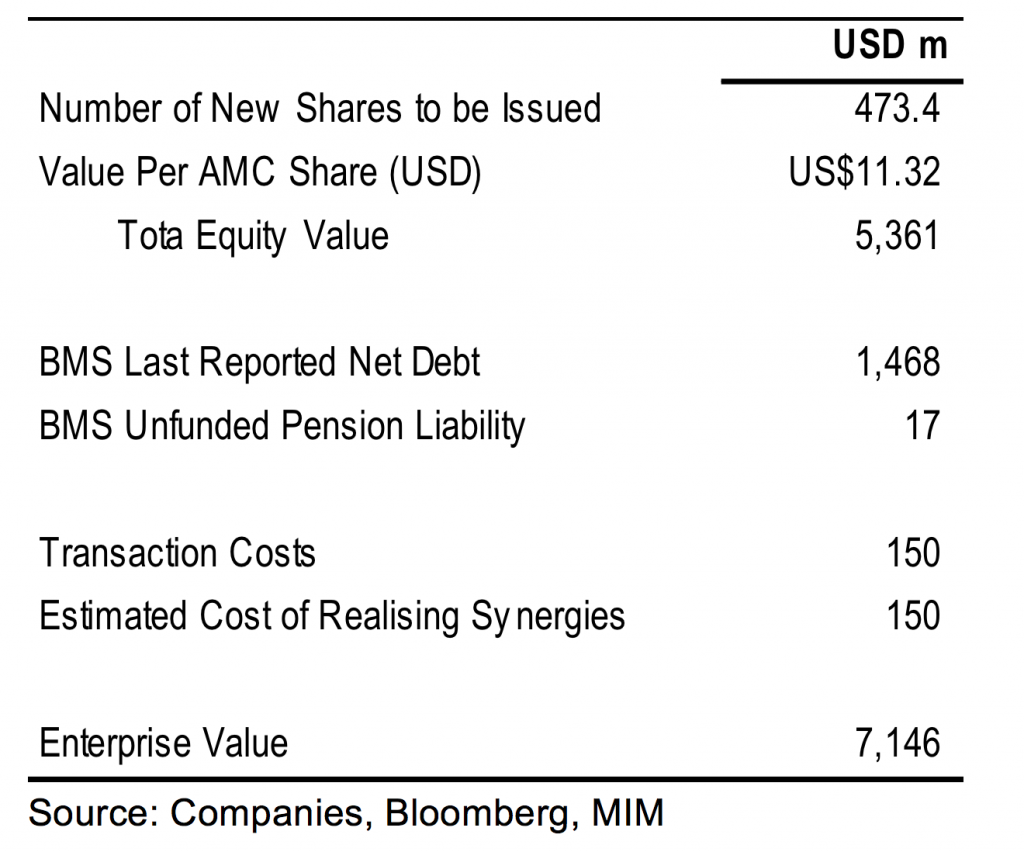 When this is compared to Bloomberg’s estimate of the sell side consensus forecast for Bemis’s EBIT in CY19 of US$424 million, the return on funds employed from the acquisition is just 8.5 per cent pre-tax, even if the full US$180 million of forecast synergies is added. This is well below Amcor’s pre-tax weighted average cost of capital of just over 10 per cent (around 8 per cent after tax). 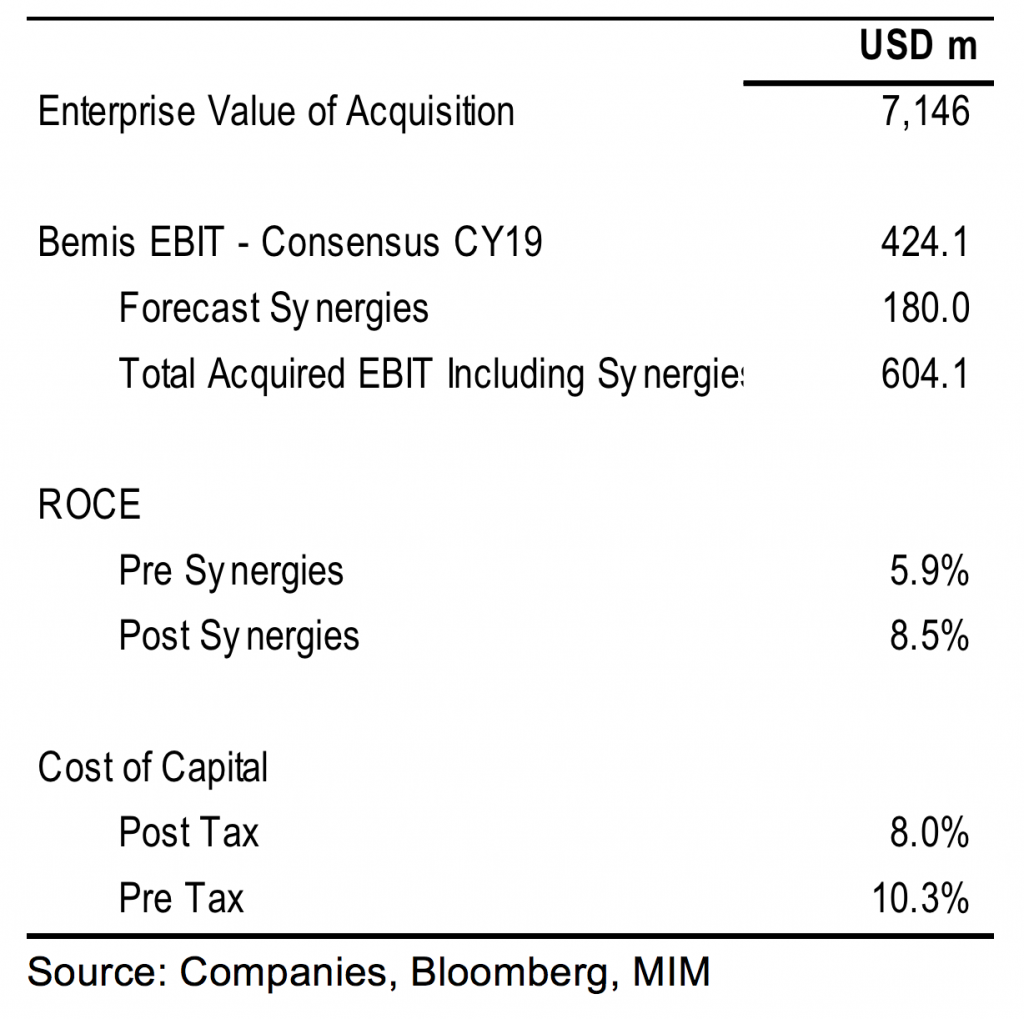 This implies that to achieve a shareholder value-neutral outcome (i.e. a return on capital employed equal to Amcor’s cost of capital), Amcor will need to deliver US$129 million of synergies on top of the US$180 the company has forecast.

The total US$309 million of synergies required to value neutrality equates to 3.6 per cent of total Flexible packaging sales of the combined group. To put this in context, Amcor’s acquisition of Alcan’s Flexibles and specialty cartons business 10 years ago generated synergies equating to around 3.5 per cent of the combined group’s Flexibles and specialty carton sales.

However, the Alcan acquisition provided significant plant rationalisation opportunities given the high degree of geographic overlap between the two businesses, particularly in Europe.

While there appears to be a reasonable degree of geographic overlap between Amcor and Bemis, it is much less than the geographic revenue splits of the company would indicate. This is because Amcor’s revenues in North America are primarily from its Rigid Plastics and Specialty Carton businesses, while it only has a 2 per cent share of the North American Flexibles market. 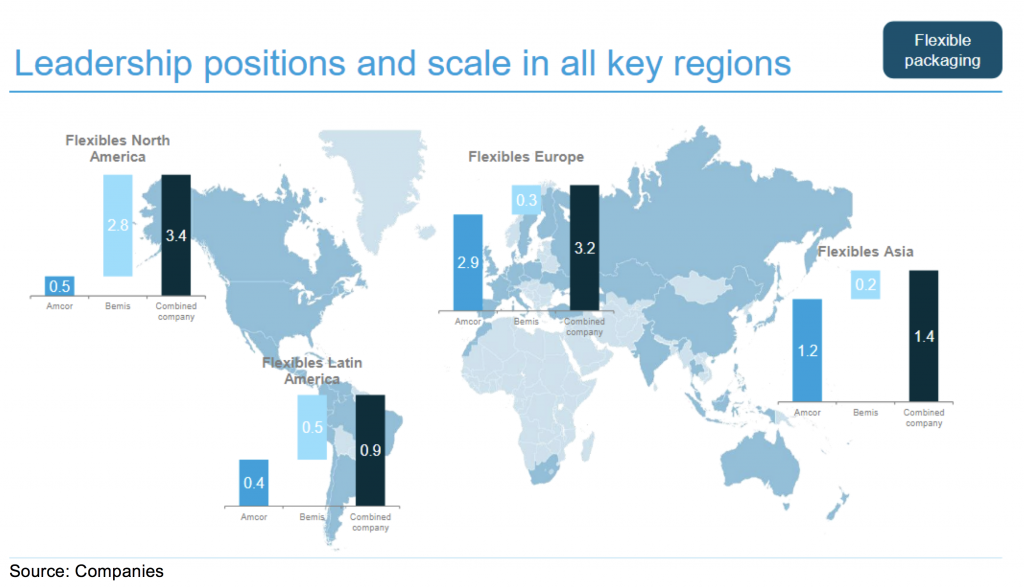 Even in Latin America, the overlap is more limited than the above diagram would suggest given Amcor’s focus in the region is on Peru, Colombia and Chile while Bemis is stronger in Mexico and Brazil.

The company has suggested that there are synergy opportunities beyond the US$180 million forecast due to revenue synergy opportunities in leveraging Amcor’s foil technologies and Bemis’s strengths in barrier films across the broader network. But these revenue synergies need to be balanced against the risk of negative revenue synergies as existing customers might look to diversify their supplier exposure to reduce their supply risks and limit the risk of increased pricing power of a key supplier in their cost base.

While most sell side analysts are dutifully promoting the deal for its EPS accretive qualities, this simply means that the return on the investment is above the earnings yield at which the market values Amcor’s current earnings base. The cost of capital is higher than this earnings yield, and a value accretive acquisition requires a return that is higher than the cost of capital. Acquisitions tend to be a higher risk source of earnings growth than organic growth. As such, Amcor’s management had historically set a high return threshold for acquisitions by year 3 of 20 per cent pre-tax. This has been watered down to some degree in recent years as it became more difficult to find a target with these metrics. The Bemis transaction is likely to miss even a 15 per cent pre-tax return target by a considerable margin.

The other factor to take into account regarding this transaction is that a large proportion of any upside generated goes to existing Bemis shareholders given that these shareholders will hold 29 per cent of the combined group post the transaction. This is on top of the benefit they receive from the control premium paid by Amcor for their stock.

Based on Amcor’s A$15.28 share price and Bemis’s US$46.31 share price on 2 August, prior to the announcement of the deal, the 5.1 AMC per BMS share ratio offered in the deal values the control premium paid by Amcor at US$1.062 billion. 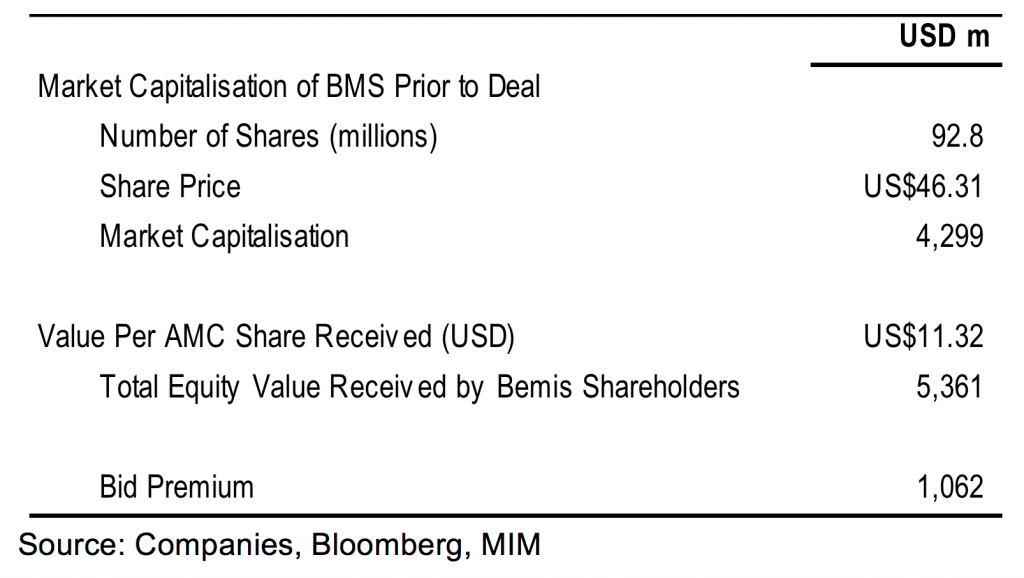 Valuing the estimated synergies from the deal at 12 times the pre-tax annual earnings benefit yields a value of US$2.16 billion. This implies that half of the value of these synergies was paid to Bemis shareholders as consideration for their shares. Deduct existing Amcor shareholders’ share of the total transaction costs and the estimated cost of realising the synergies of around US$300 million, equating to US$210 million, leaves US$888 million of value for existing Amcor shareholders from the deal.

Of course, this begs the question, if this was such a compelling acquisition for the company with upside to synergy estimates, why hand a significant chunk of the benefits to Bemis shareholders? Why not undertake an entitlement equity raising to fund a cash bid for the company, thereby rewarding Amcor’s existing shareholders with the full benefits of the deal?

The size of the required equity raising at around US$4 billion would probably be used as a reason. This would have likely required a deep discount entitlement issue with an issuance ratio of at least 1 for 3 existing shares. But if we think back to Amcor’s acquisition of Alcan’s packaging assets in 2009, the company undertook a 4 for 9 entitlement offer in August 2009 to fund that deal on a cash basis. This meant all of the benefits from rationalising the asset and cost bases of the two companies flowed to Amcor shareholders.

So why a stock-based deal this time around? The answer is likely to be associated with the fact that in the case of the Alcan acquisition, Amcor had a desperate seller. This time around, it’s the buyer that’s the eager party.

Catalysts That Ended Prior Bull Markets