The worsening drought in Eastern Australia is resulting in increasingly difficult conditions for businesses right across the agriculture sector. And if official weather forecasts hold firm, it looks like things will be tough for some time to come.

Highlighting the impact of weather on the near-term earnings outlook for businesses exposed to the agriculture value chain, Nufarm released a very weak trading update for FY2018.

The company stated that the extended dry conditions in Australia have significantly impacted the trading performance of its Australian and New Zealand division, such that its EBIT for the year to July 2018 was likely to be between A$5 million and A$10 million. This compares to A$51.6 million in the prior year, which itself was considered to have been a weaker than normal year in terms of seasonal conditions.

Nufarm is not the only agricultural company to report weak trading conditions on the back of the drought. In its half-yearly result released in May, Graincorp noted small summer crop receivals and challenging planting conditions for the east coast winter crop, which would negatively impact grain receivals in FY2019.

At its full-year results release in May, AACo noted that the dry conditions were increasing feed costs and reducing cattle prices.

In July, rural services companies Elders and RuralCo noted that the dry conditions had negatively impacted chemical demand and reduced cattle prices as farmers reduced herd sizes to cut costs. This was offset by good sheep and wool prices as well as volumes, while feedlot utilisation increased.

While it has not released a trading update, Incitec Pivot’s fertiliser business is likely to have experienced similar demand issues to those reported by Nufarm.

The rainfall chart provided by the Australian Bureau of Meteorology highlights the near-term plight of the broader east coast industry. 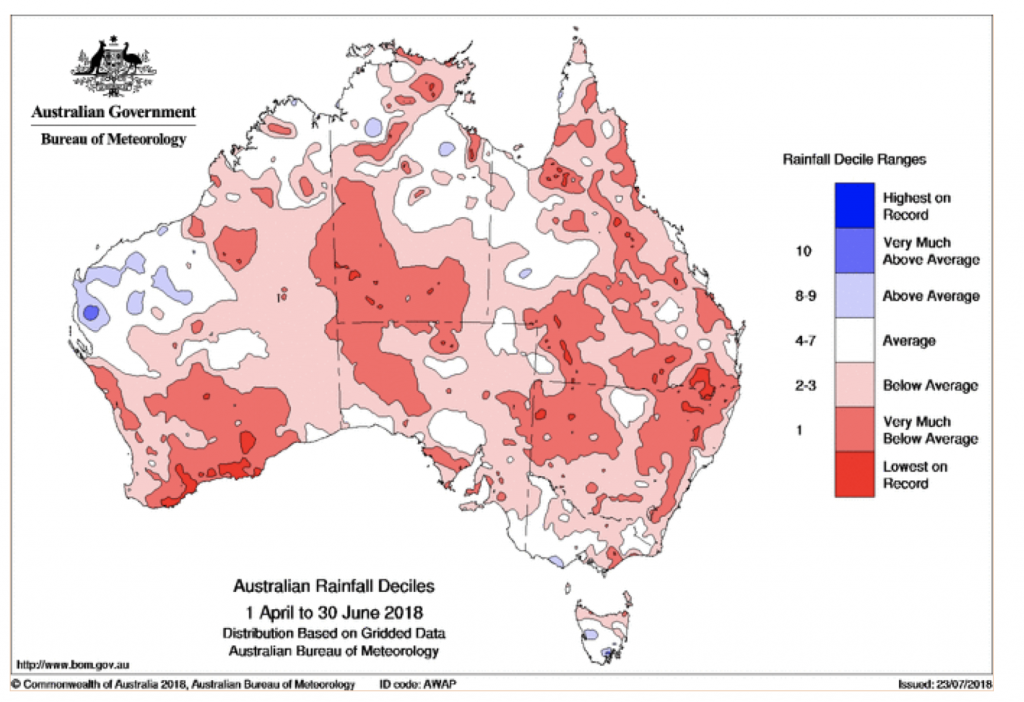 If we compare the soil moisture profiles in June this year to the same time last year, we can see a marked deterioration for the key east coast cropping areas.

Crop input companies like Nufarm are a ‘canary in the coal mine’ for the broader industry given they tend to be the first impacted by a deterioration in agricultural conditions. This is because demand for Nufarm’s products primarily occurs prior to and during the planting period. By comparison, the impact of agricultural conditions on Graincorp occurs once the crop is harvested, around 6 to 9 months after Nufarm.

For companies like Elders and RuralCo, the initial negatives of lower agricultural input demand and lower livestock prices is generally offset by a spike in livestock auction volumes as farmers look to downsize their herds to cut costs. However, once the herd reduction is complete, volumes then fall, resulting in weaker revenues down the track.

The interesting point is the limited change in earnings expectations for Graincorp over the last couple of months according to sell side analysts’ forecasts compiled by Bloomberg.

Average sell side analysts’ upcountry receivals forecasts for FY2019 currently sit at around 6.7 million tonnes, 10 per cent higher than in FY2018. While this is consistent with the ABARES east cost crop production forecast for wheat, barley, canola and sorghum released in mid-June of 16.5 million tonnes, the yield outlook for the winter crop has deteriorated significantly since this forecast was set. Forecasts for a 4 per cent increase in average wheat, barley and canola crop yields relative to last year, placing the forecast yield in line with the average over the last 20 years. This is likely to be heavily downgraded in the next ABARES Crop Report (due to be released in mid-September) unless there is a dramatic change in climatic conditions. This would see the production forecasts fall relative to the prior year with a winter crop average yield similar to that from 2008/9 resulting in a 14.0 million crop estimate. 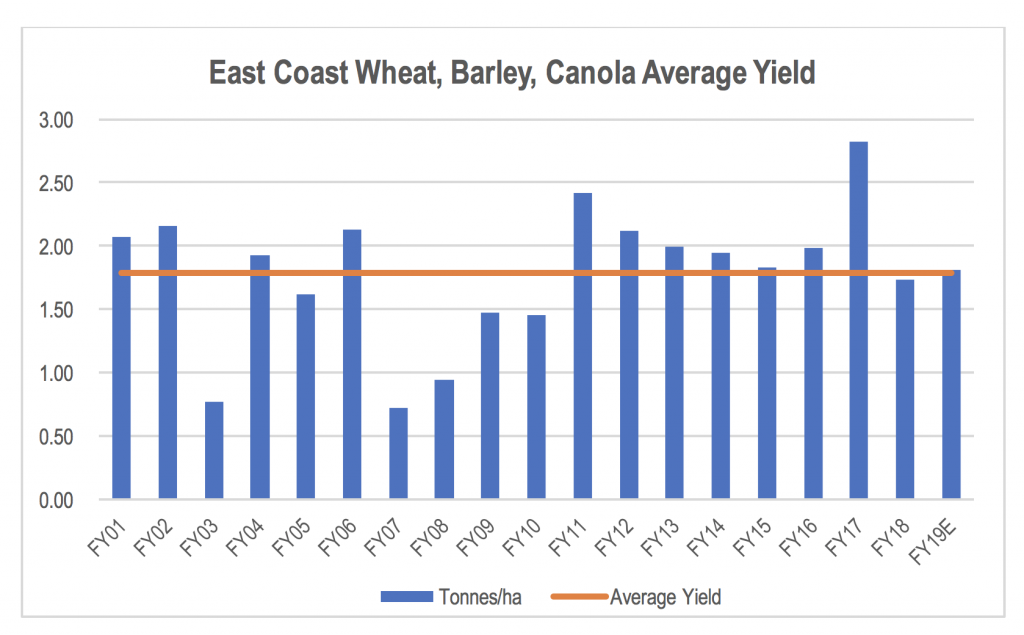 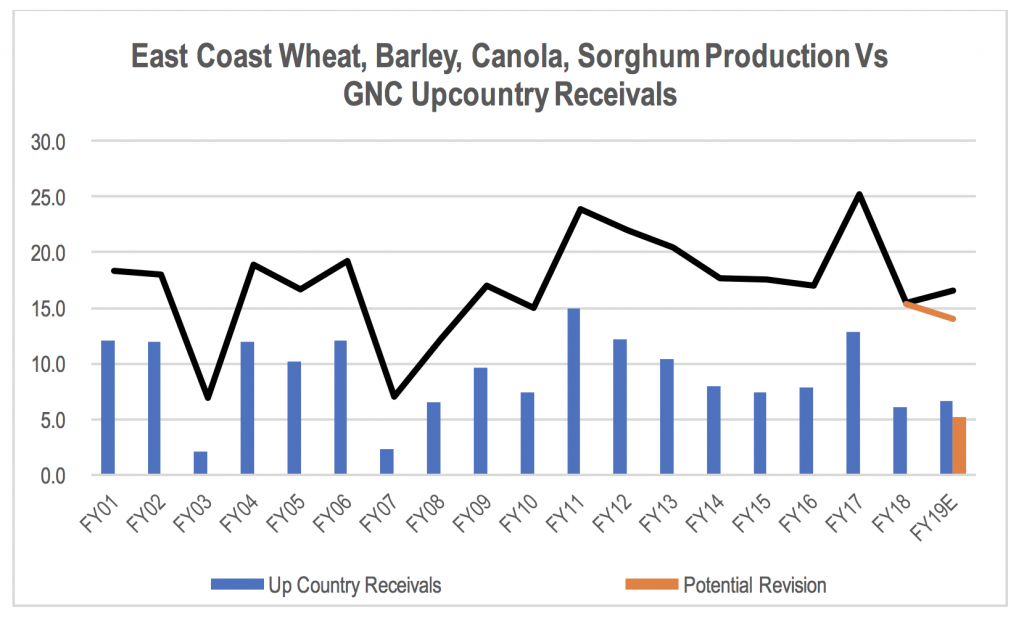 While the average FY2019 EBITDA forecast for Graincorp has fallen from around A$303 million in mid-May to A$287 million at present, this still represents an 18 per cent improvement on the average forecast for FY2018. Given the outlook for the current winter crop, this appears to be optimistic, suggesting there is more downside risk to near consensus earnings forecasts.

It should be noted that Graincorp has diversified its earnings base considerably over the last 10 years. As such, the percentage impact a poor winter crop has on earnings has reduced. But it is still a material driver of year-to-year earnings volatility.

The other factor to consider is that the market tends to overreact to volatility in near term earnings due to seasonal conditions. Historically, this has presented a good investment opportunity in positioning for a mean reversion in conditions. However, it appears that there is probably more of a downward rebasing of near term expectations to come before this opportunity fully presents itself.