×
Skip to content
What happens when pesky, disruptive upstarts take on the big incumbents in an industry? More often than not, they find themselves in a battle royale over market share. And that’s just what’s happening in the wealth management industry, where Westpac is fighting back against the likes of Netwealth, HUB24 and Praemium.

This battle provides a very interesting example of competitive forces at work and things to look out for when considering an investment in very fast-growing companies.

There are several sources for revenues for a WMP but the most important include:

Traditionally, the WMPs have tended to be a bit limited in their investment choices as the big banks and AMP have preferred to see them as tools to channel customers to their investment products and hence make money on both the distribution and management of the investments in a customer’s portfolio.

The WMP industry in Australia has long been dominated by AMP and the big banks with each having 15 per cent+ market share followed by a long tail of smaller providers.

What has happened recently though is that a number of smaller independents have started to rapidly take share from the incumbent players. There are several reasons they have managed this, and they are coming at it from slightly different angles, but the main ones are:

As a result, we can see that in particular Netwealth, HUB24 and Praemium have, despite only having less than 2 per cent market share each, managed to capture 40 per cent of the net flows in the industry (i.e. the combination of net inflows/outflows into the industry and the flows between different WMPs) in the total WMP industry on an annual basis and 72 per cent if we just look at the March 2018 quarter, showing on charts below, using data released at the end of June by Strategic Insights, which analyses the sector. 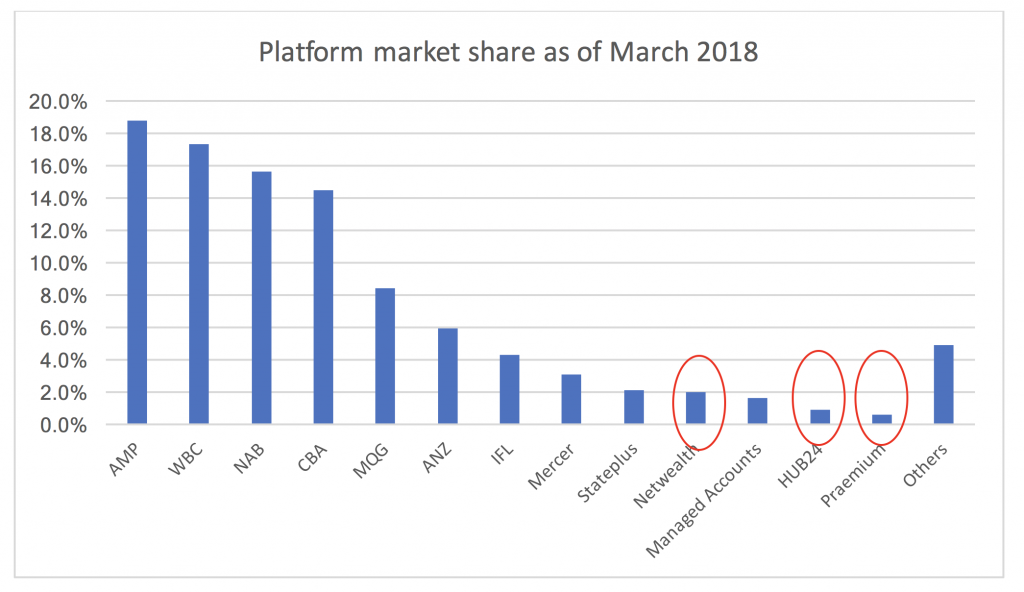 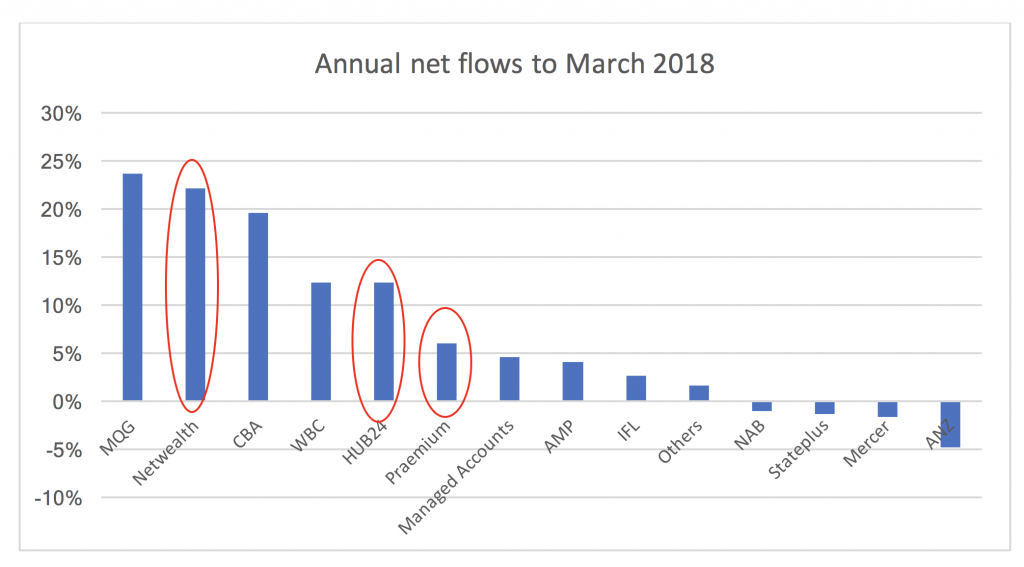 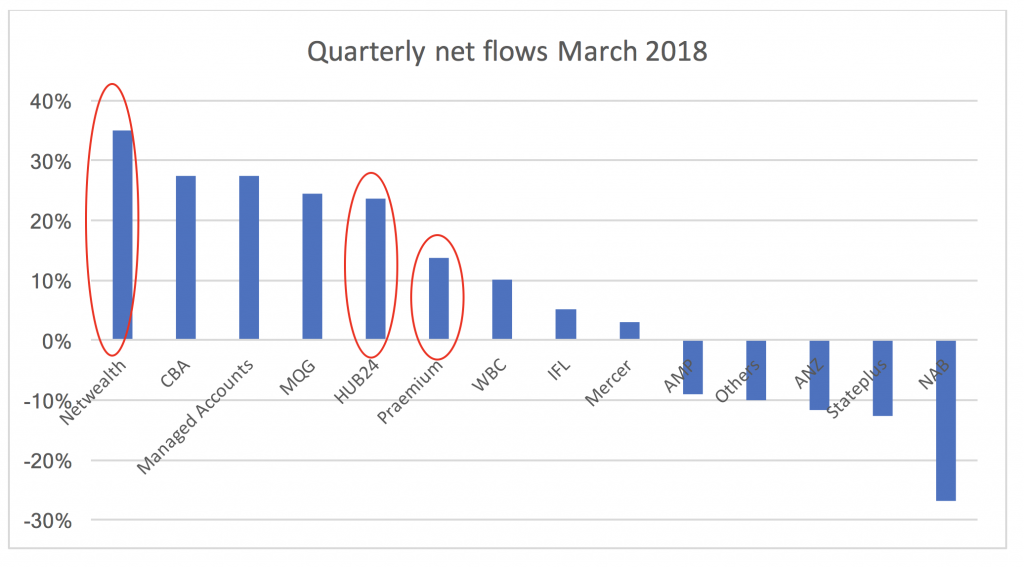 The newcomers to the industry have clearly been eating the incumbents’ lunch and benefitted strongly from the inertia and complacency of the old players.

Game theory states that when you have such a situation, you would imagine that the incumbents will be fighting back eventually and that is one of the risks of investing in companies that are rapidly changing the game in an existing sector.

On Monday this week, we saw just that when Westpac-owned BT announced they are slashing the admin fee charged for new accounts using their Panorama platform to 0.15 per cent of the amount under management up to a cap of $1 million from a previous charge of around 0.35 per cent (uncapped) and that all existing customers can transfer to the new rate if they so request. If all of the existing customers move to the lower rate, it will impact Westpac’s revenues by around $70 million. This means that for an account balance of $1 million, the admin fee for Panorama will be $2040 which can be compared to Netwealth at $3375 and HUB24 at $3420.

Westpac has been investing significantly in its platform’s capability – in contrast to any of the other incumbents – and it is by far the most advanced platform of the incumbents so it is interesting to see them taking this step.

So, what has been the market’s reaction to this? As at the time of writing (24 July at 15:38), the share prices of Netwealth, HUB24 and Praemium are down 17 per cent, 13.5 per cent and 9.8 per cent respectively since Friday closing price.

What can we learn from this?

The Montgomery Funds own shares in Westpac. This article was prepared 25 July 2018 with the information we have today, and our view may change. It does not constitute formal advice or professional investment advice. If you wish to trade Westpac you should seek financial advice.

Andreas is a Senior Analyst at Montgomery Investment Management. Andreas joined from Navigo Partners, a M&A advisory firm in Stockholm, Sweden where he was a Director responsible for origination and execution of Scandinavian projects. Before this, he worked for three years in corporate strategy at Alinta Energy in Sydney.