If you follow global financial trends, you would have noted the continual (and recently accelerating) decline in the slope of the US yield curve. Recently, it has narrowed to a level not seen since 2007.

The curve shows the difference in interest rate that you would receive from lending to the US government for, say, 2 years versus 30 years. You can see this spread between the yields of 2YR and 30YR US Treasury bonds in the chart below:

Difference between 2YR and 30YR US Treasury Bonds 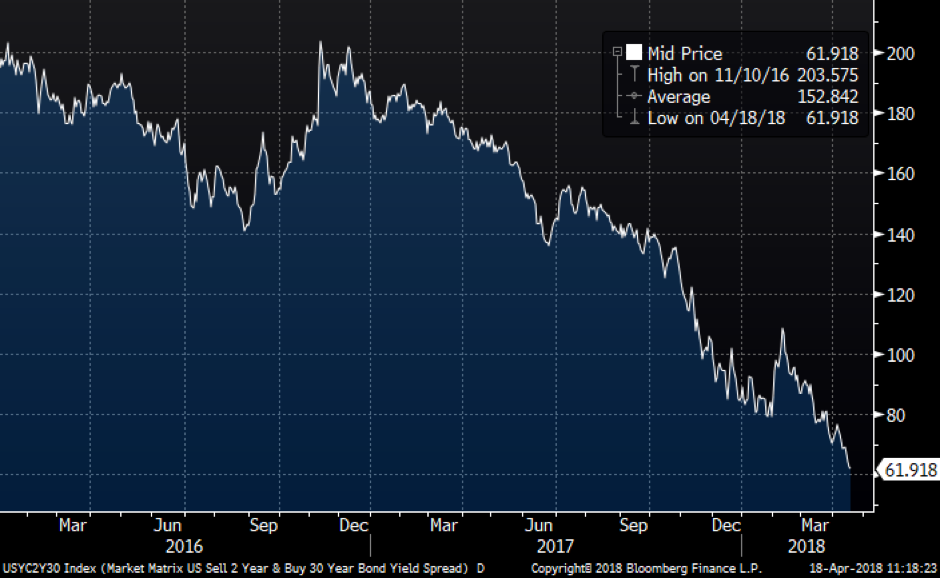 Why is this happening?

US Treasury Yield Curve (Today in green; versus 18 months ago in yellow) 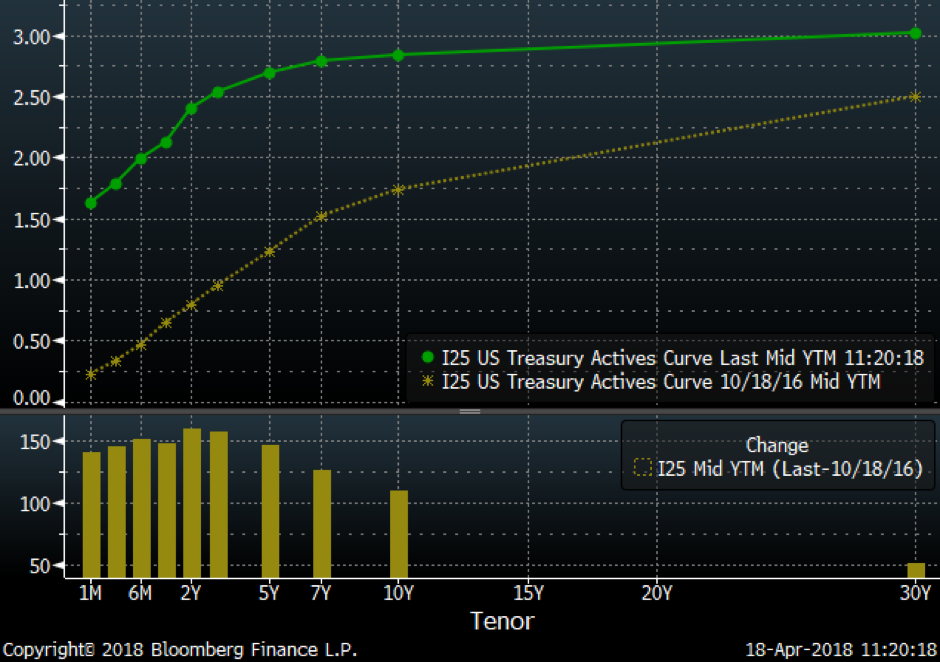 Now, from the chart above, something jumps out immediately. The flattening of the curve has been driven almost entirely from increases at the short end. The long end has not been falling – and has even increased slightly.

Ok, so the question is, why such an increase at the short end of the curve?

Well the obvious answer is that the Federal Reserve has increased its policy rate by 1.25 per cent over this period.

But we believe there is a second part to this answer which relates to US fiscal policy in recent months. Following the Trump tax cuts and recent budget expansion, the US Treasury has been forced to ramp up its issuance of US Treasury Bills and Notes to keep the government funded. We can clearly see this in the chart below. 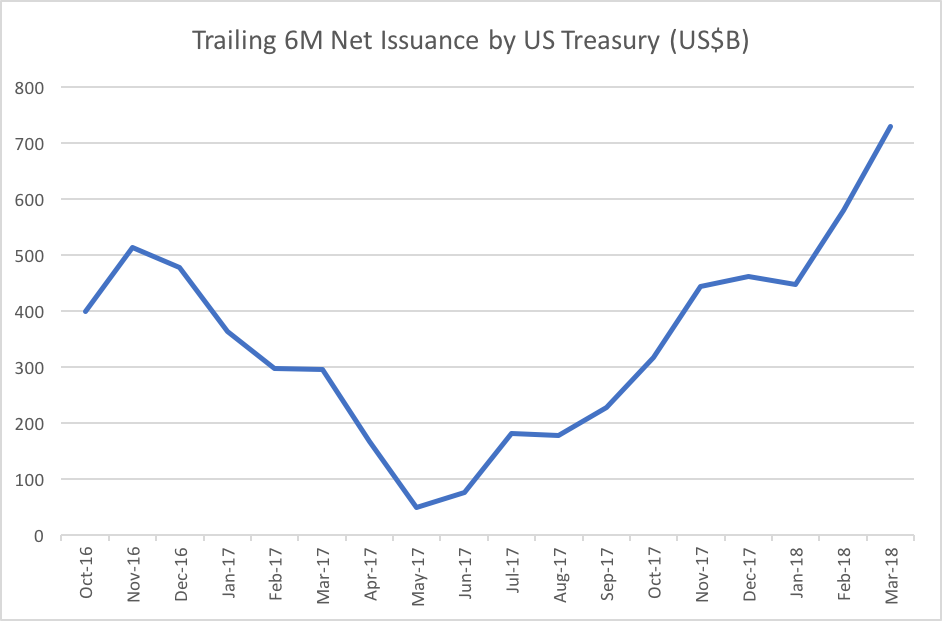 But what is most interesting is that two-thirds of this new, ramped-up issuance has been at the short end of the curve, as illustrated by the chart below. Such a ramp-up of new issuance would logically result in a slightly higher interest rate required to attract the level of borrowings needed by the US Treasury. We believe this significant ramp-up in new issuance by the US Treasury at the short end of the curve is a meaningful contributor to the flattening yield curve that is currently being observed. 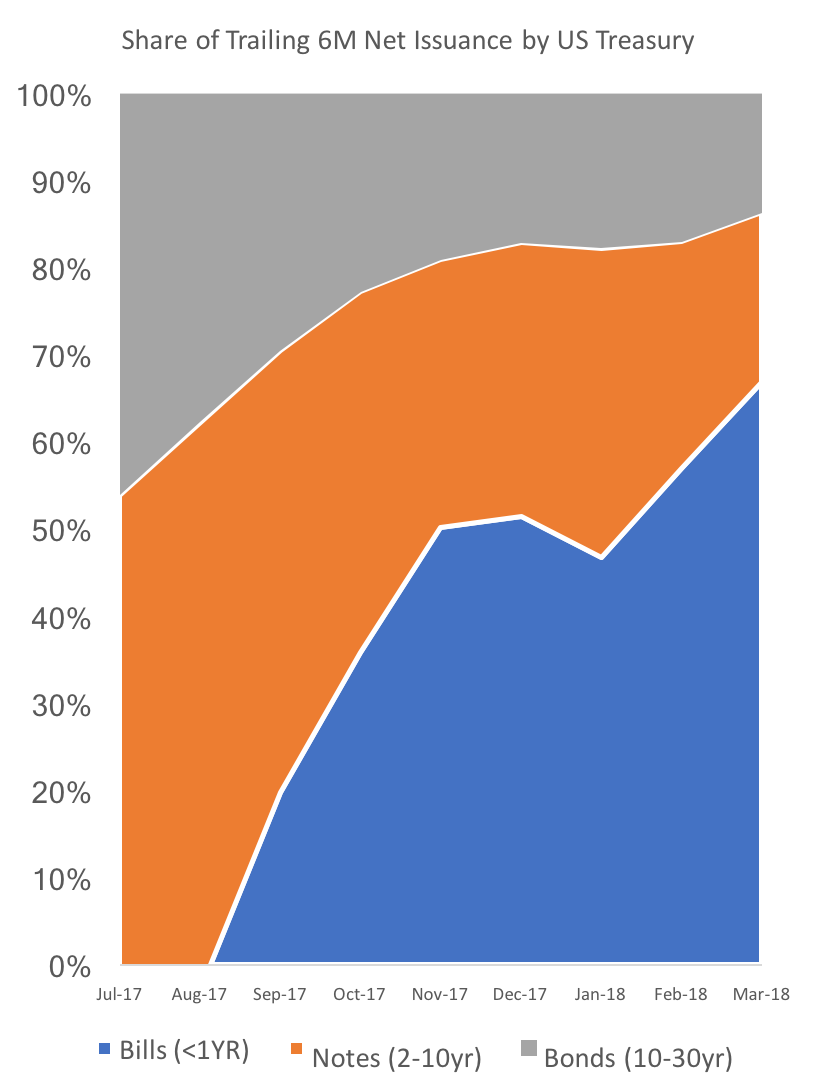 Andrew Macken is a Portfolio Manager at Montgomery Global Investment Management. Andrew joined Montgomery in March 2014 after spending four years as a Research Analyst under Jim Chanos at Kynikos Associates in New York.