Medibank Private (ASX: MPL) has endured a bumpy ride since listing in 2014. But recent management comments point to a company in transition, with potential growth on the horizon.

The private health insurance industry has been under pressure for some time as a result of issues around product affordability as claims costs rise well ahead of inflation due to the aging population. These cost increases need to be passed on evenly across all policyholders due to the community rating system, reducing the value of private health insurance to younger consumers as they increasingly subsidise the growing healthcare costs of the Baby Boomer generation. This makes for a challenging short to medium term revenue growth outlook for the industry as policy volumes come under pressure.

This dynamic has been a drag on the performance of Medibank Private. However, weak industry revenue growth has been exacerbated by internal problems that have seen its core brand lose share. The company has been investing heavily in a completely new IT system that replaced its old mainframe system that dated back to the 1980’s. While we expect the dramatic capability enhancement and simplification of Medibank’s systems to deliver a material benefit in the long run, anyone that has been through a business network change will recognise that these things rarely go smoothly. The scale of the project at Medibank meant that implementation problems were plentiful, and some very meaningful. Problems that impacted the customer’s experience were particularly painful, negatively impacting the company’s brand performance and perception.

Arguably, the company had also placed too much emphasis on short term margin and profit improvement rather than sharing the benefits generated from efficiency improvements with customers.

In light of this, we looked with interest at the company’s earnings results for the year to June 2017.

The company’s results were generally in line to slightly better than expected, with its underwriting profit increasing 3.8 percent in the six months to June relative to the same six month period last year. Earnings from the renamed Medibank Health division were up strongly over the period, while overhead costs were down marginally.

Of greater interest was management’s comments around the progress it is making in stabilising the business. Medibank’s share of customer complaints to the Ombudsman have fallen significantly over the last year, having peaked at over 60 percent in the September quarter of 2016. In the June quarter of this year, its share of complaints was 36 percent, still above its 27 percent share of policyholders, but a dramatic improvement. The company is also showing improvements in its customer net promoter scores. This indicates that the company is getting on top of the IT system implementation issues such that it is becoming less of a negative for customer experience.

This is important, because it will allow the company to transition from a defensive mindset to a far more offensive one. We started to see the impact of this late in the period with the company releasing more new products in FY17 than it had over the previous five years. 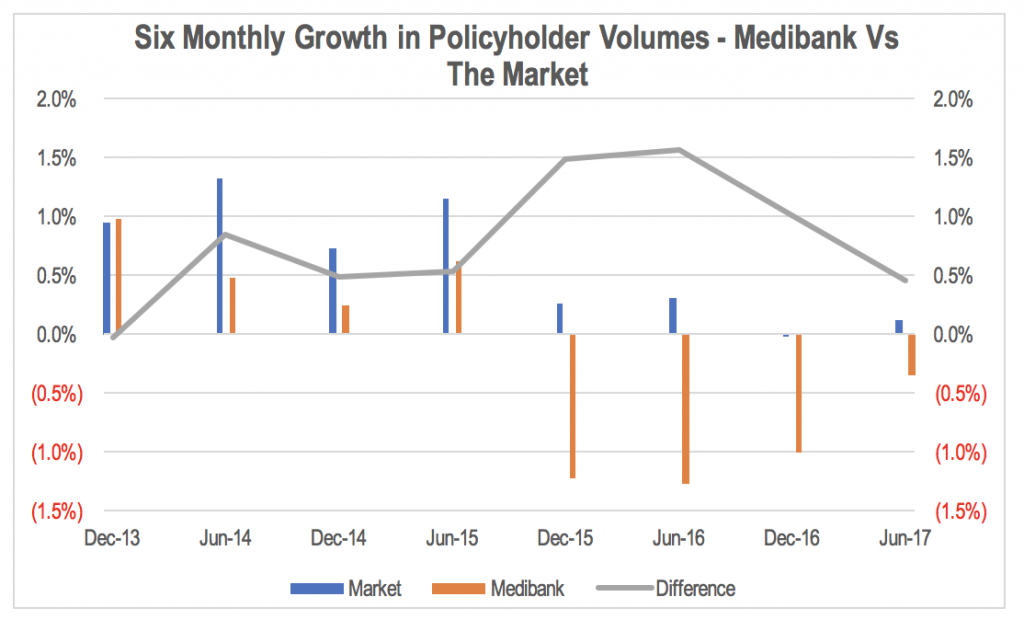 The chart above shows that the volume growth performance gap between Medibank and the broader market peaked in the middle of last year, and has progressively contracted since then. Management expects to close out this gap completely by the end of FY19, but if it continues to improve its performance at the current rate, this will occur far more quickly.

Additionally, the company will be cycling the elevated level of costs caused by the need to urgently fix problems during the implementation, while delivering additional efficiency savings. Management noted that in FY17 it invested around A$15 million in additional staffing resources to fix its IT problems more quickly. This will not recur in FY18, resulting in a net reduction in operating costs. Management also increased its forecast for cost savings over the next 3 years by A$10 million to A$50 million, with A$20 million to be realised in FY18.

In conjunction with ongoing benefits from the payment integrity programme, reductions in management expenses and increased IT functionality will be shared between shareholders and reinvested into improved products for consumers. Management flagged the launch of a number of customer loyalty initiatives over the next six months as an example of its reinvestment in product. Given that the profitability of retaining an existing customer is generally far greater than the profitability of acquiring a new customer, reinvestment that improves Medibank’s lapse rates would be a very positive outcome. This represents a potential turning point in the competitive position of Medibank.